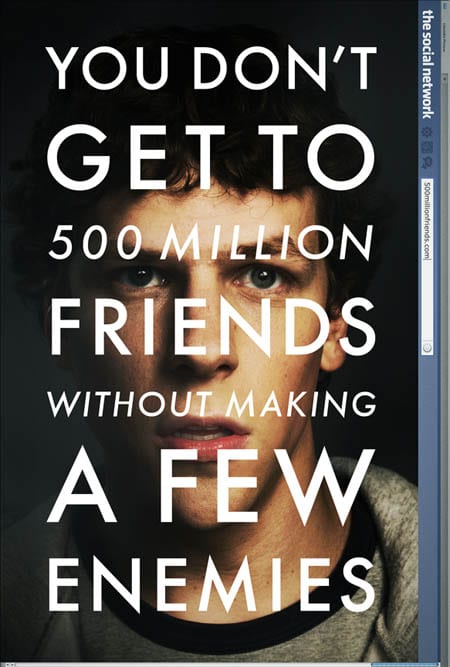 Admittedly, when word of a Facebook movie came out, I was beyond skeptical. My thoughts were pretty similar to when they announced movies coming out about “Stretch Armstrong” and “Battleship.” It seems like a blatant attempt to cash in with a franchise that has built-in appeal. With 500 million users, most of the world is affected by Facebook. But a movie? Boring.

My ears perked up when it was announced that Aaron Sorkin was writing the film. Sorkin is known for writing “The American President,” “A Few Good Men,” and winning about a dozen Emmy Awards for creating “the West Wing.” So the man’s got cred.

Then came David Fincher. Yeh, the one that directed “Fight Club,” “Zodiac,” and “The Curious Case of Benjamin Button.” So now the movie’s got tons of appeal.

The film also sports an impressive cast. Justin Timberlake needs no introduction; Jesse Eisenberg starred in Zombieland and Andrew Garfield is the next Spider-Man. So that adds to the pie.

But impressive reviews, a great writer and director and an appealing cast–is that enough to lure viewers to a film about Facebook? We’ll find out next weekend.

The film has an attractive marketing campaign that has me intrigued every time I see the trailer, and now that critics are calling it “this generation’s ‘Network,” so I’m in, when a year ago I thought it was a lame idea. Has the finalized “Social Network” got you in its grasp yet?