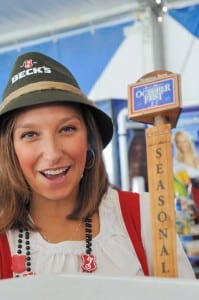 The event will feature live music, a chowder competition, over 100 types of domestic and imported beer from 30 microbrew companies, and ahh, that fresh sea air!

Twain said it himself: “Never refuse to take a drink — under any circumstances.” The event will feature live music, food, and samples from more than 20 microbreweries for beer-loving history buffs.

Celebrate the season surrounded by foliage on Mount Desert Island, sampling dozens of brands of beer from 20 Maine breweries while listening to live music, eating food, and perusing 30 craft booths to satisfy your need for homemade trinkets. It’s the way a weekend should be, eh?

There will be chicken dancing, a keg bowling game, live German Oompah bands, German food, and plenty of Harpoon and UFO beer for everyone! So grab your stein, your lederhosen or your cute beer maid outfit and say, “Prost!”

Support the non-profit agency Boston Cares by drinking complementary Sam Adams brews (including rare and unreleased beers!), enjoying food, competing in games for prizes, and listening to Oompah music. Unfortunately, we’ll never know how long Sam could hoist a beer stein, but he was probably better at it than you.

Brought to you by the Wormtown Brewery, this Oktoberfest will feature live music from local bands, German grub, and lots and lots of beer. Hurra f¼r bier!

They don’t call it a pumpkin festival for nothing! This event — kind of like a haunted house for adults — will offer pumpkin-inspired food, over 22 different pumpkin ales, a giant beer-filled pumpkin, and a whole lot of costumed party-goers.

Get in the Granite State spirit in the backyard of the Redhook Ale Brewery, where you can listen to live bands and sample over 90 New England beers from over 30 breweries. Get a complimentary tasting glass and pour to your heart’s content.

Even die kinder can enjoy this Oktoberfest, with face painting, games, a bouncy house, and more! For die erwachsenen, there will be a stein holding competition, a keg toss, a best brew competition, and bier galore. For everyone, there will be German food and live Bavarian music from the world renowned King Ludwig Band.

Beer lovers unite! This Oktoberfest prides itself on its great variety of beers — and its two biergartens. Also brag-worthy is its 65-foot-long Big Taste Grill, making this event a gigantic tailgate party at 2,500 bratwursts per hour! Also expect yodeling, folk dance performances, live music, and a kid-friendly area.

With advanced tickets already sold out, over 60 beers to sample, live music, and plenty of food, this mountain brewfest should be one to remember!

Like its Boston counterpart, this Octoberfest will feature Harpoon and UFO beer, Oompah music, German food, chicken dancing, and a keg bowling game. There will also be a road race and free tours of the brewery offered all weekend long!