I don’t get the Justin Bieber craze. I get that I’m not supposed to. But I’m a relatively open-minded individual, and I’ll explore the various modes of art and entertainment to grow and make myself a well-rounded person. But I just don’t get what the deal is here.

Is it his personality? Maybe the music that his fans obsess over? Perhaps it’s those dashing good looks. But I can’t really say it’s any of those that spring to mind as dynamic reasons that he’s catapulted to the stratosphere of fame in the current entertainment landscape.

There’s a constant stream of rumors from Hollywood that he’s bratty, vindictive, and difficult to work with. Whatever attention I pay to him, he seems to always come off a little douchy.

I’m not even going to dignify a song that has a chorus of “Baby, baby, baby, ooooooooooh” with a review, but suffice to say that Bieber’s potential as an actual songwriter is limited to nonexistent. He doesn’t actually sing in most of the songs as much as speak to the autotune box and wait for pre-teen girls to start crying.

The Jonas Brothers were pretty bad too. Their music wasâ€¦.well music is a strong word for the noise they put out, and yet women threw their money at those goons and made them pop culture icons too. (Sidenote: Everything you need to know about the Jonas Brothers can be found in this episode of South Park). At least Miley Cyrus Could sing and do stuff. Her music is mildly tolerable, and she’s even had some crossover hits; “Party in the USA” and “The Climb” definitely made it onto college student’s iPods.

The Bieb’s music is better than the JoBros at least. Credit good producers and people who are trying to turn him into a sensation. In fact, if you take away the lyrics and Justin singing, there are some good beats to those songs. And Ludacris’ PG-13 rap is also mildly amusing.

So if he can’t even sing or write worthwhile music, what’s the lasting appeal to this guy? As E! Online mentioned, the merchandising of the Bieber brand has gone so far you can buy bedsheets with his face on them. The pre-teen set has declared him to be the hottest thing alive right now.

I’m not going to go into the merits of the attractiveness of a 16 year old boy, but I’ll introduce a couple of items so you can make your own decision. First, Here’s a picture taken Bieber, and a picture of another recent teen heartthrob Taylor Lautner from Twilight: New Moon, filmed when Lautner was also 16. Make your own judgement here folks. 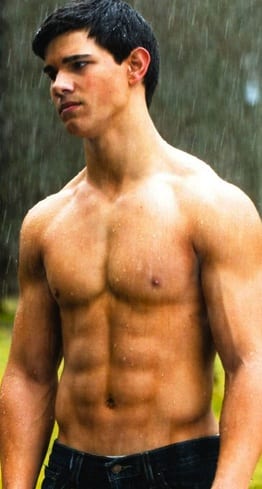 Ultimately, Bieber is the same as all the teen heartthrobs, and they never have any rhyme or reason to their fame. The only thing history tells us they have in common is that they all fade away. I don’t know why there’s such an anti-Bieber backlash amongst the 18+ crowd (perhaps the terrible music that radio is stuffing down our throats), but the younger crowd seems to love him. Hollywood and the media are playing along, wondering what the future has in store for this mega-sensation. I just hope it’s similar to Dustin Diamond’s career.