Lovers of the FOX series Fringe tuned in this evening for the premiere of season 3 following a long summer that left their favorite FBI heroine, Olivia Dunham (Anna Torv), lost and alone in an parallel universe. They might have expected an explosive opening scene involving a strange catastrophe — perhaps an attack from otherworldly cyborgs or an innocent in a coffee shop being consumed by a flesh-eating virus. But instead, it was just Olivia, hopelessly stranded and trying to find her way home.

Fringe, the brainchild of LOST creator J.J. Abrams, follows Olivia and her crew of misfit geniuses as they slowly unravel the mysteries of the universe. One of her sidekicks, Walter Bishop (John Noble), is a jolly, grandfather type with a brilliant mind who has, for most of his life, studied what can only be described as weird shit. He and his equally-brilliant son, Peter (Joshua Jackson), have been brought on as civilian consultants to work with Dunham in the FBI Fringe Division. 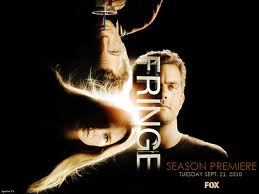 The seemingly random (but not random at all) and totally weird events that littered seasons 1 and 2 culminated in the season 2 finale. Olivia and the Bishops discovered that there is a parallel universe that is at war with ours — and so naturally, using Dunham’s abnormal susceptibility to time travel, they went over to it. There, they discovered not-so-nice versions of themselves who wanted to kill them (stay with me) and not long after Peter confesses his love for Olivia, he and Walter accidentally travel back to their world without her, taking instead, her parallel self (let’s call her Evil Olivia, because she dyes her hair red and we all know that redheads in TV shows are evil).

And thus season 3 begins with Olivia strapped to a chair, fighting to keep her identity. After Walternate (Peter’s affectionate name for his much-less-grandfatherly parallel father) pumps her brain with Evil Olivia’s transplanted memories, she struggles to separate herself from the stories her brain is telling her. She meets people that, to her, are dead. She searches for places that no longer exist. It’s not long before we discover that the parallel universe is crashing in on her, to the point of taking over her very mind.

J.J. Abrams very rarely disappoints — just ask any LOST fan who is still trolling the online forums, searching for the true story behind the island. With Fringe, he’s done it again. Aussie Anna Torv brings a sensitivity to Olivia’s character that is heart-wrenching, but so well integrated into her character that action scenes seem totally natural for her. Joshua Jackson does what he does best — delivers that witty line with the Clooney head tilt, making the girls swoon. But the standout performance comes from John Noble. Noble plays polar-opposite characters with pinpoint accuracy. As Walter, he is lovable and brilliant, mismatched and fumbling. As Walternate, he is chillingly conniving, and somehow bears no resemblance to his lovable counterpart. He has earned his credibility in the first two seasons, being an unbelievable lunatic, a regretful father and a boundary-pushing scientist. But here we see what he could have been, and is, in a way, which makes him an even more unforgettable character.

You can catch Fringe on Fox at 8pm.