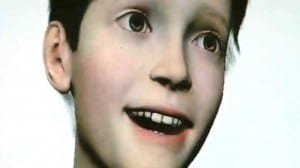 Remember that weird android kid that Fable creator Peter Molyneux showed off with the debuting Project Natal? The one that only wants to be human…and to take over the world? Yeah, you’ll probably never see it again.

According to Eurogamer (who credits an anonymous source), work on Molyneux’s life simulator has officially been halted and 19workers contracted for the title have been let go. The source goes on to say that the studio will now work exclusively on the Fable series and that the tech from Milo will be incorporated into an upcoming, yet unannounced Kinect enabled Fable title.

Milo’s fate has been uncertain for some time now, as it was announced, then unannounced that Milo was a merely a tech demo. Lionhead hasn’t commented on the rumors, but we’ll update when they do.