Joaquin Phoenix returned to “The Late Show With David Letterman” on Wednesday. It was his first appearance since an odd February 2009 visit to the show.

Last year, Phoenix grew a long beard and started acting weirdly. He did Letterman in February 2009 wearing dark sunglasses, and he mumbled answers to questions and seemed confused.

The 35-year-old actor’s bizarre antics and stunts were mockumented by Casey Affleck in “I’m Still Here.” Affleck has said the stunts were part of a large hoax and that Letterman was in on the whole thing. 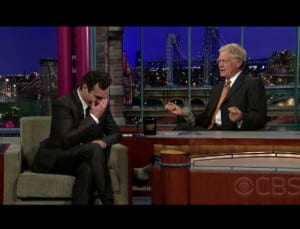 Phoenix has returned to “normal” now, and he’s shaved.

Phoenix also said that Letterman was not in on the hoax, despite recent rumors.

"Yeah. Was there a script that you and I were working with?” Letterman came back.

"Yeah, but, like you said, I mean, I think that you’ve interviewed many, many people, and I assumed that you would know the difference between a character and a real person, so — but I apologize. I didn’t — I hope I didn’t offend you in any way.”

"Oh, no. Oh, no, no, no. I was not offended,” Letterman said. “I’m telling you, it was so much fun. It was batting practice, you know what I mean? Every one of them was a dinger."

“We’d hoped to come on a talk show,” Phoenix said with a laugh, “and I was looking for a beat down, and I got one … I want to thank you for that.”

Affleck appeared on Jay Leno’s “Tonight” show Tuesday. He pointed out that people laughed at Phoenix during the antics but never expressed real concern about him.

“Afterward, the movie comes out, the critics like to say `this is crazy, this is disturbing, this is sick,'” he said. “But while it’s happening, people were happy just to mock him and make fun of him.”

This is where we are obligated to remind you that Jaoquin Phoenix is the younger brother of the late actor River Phoenix, who died of a drug overdose on October 31, 1993 at the West Hollywood club the Viper Room.