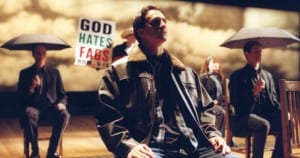 On October 6, 1998, Matthew Shepard was tied to a fence, beaten and left to die in the outskirts of Laramie, Wyoming. Matthew’s murder became a watershed historical moment that revealed many fault lines in our culture. A month after the murder, members of the Tectonic Theater Project traveled to Laramie and conducted over 200 interviews with residents over the course of a year, resulting in the play “The Laramie Project,” which debuted in 2000. It has since become one of the most-performed plays in American history, seen by 30 million people across the country. It has also been a driving force in the movement to enact the Matthew Shepard and James Byrd, Jr. Hate Crimes Prevention Act, signed into law by President Obama in October 2009.

ArtsEmerson is presenting the Tectonic Theater Project’s Boston debut in “The Laramie Residency” from Friday through October 2, featuring not only “The Laramie Project,” but also the premier of “The Laramie Project: Ten Years Later,” which will tour nationally. The follow-up includes in-depth interviews with convicted killers Aaron J. McKinney and Russell Henderson and features many cast members from the original Laramie Project.

BLAST: Was the Tectonic Theater Project always planning to write an epilogue to “The Laramie Project”? 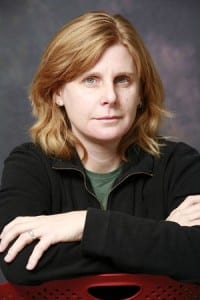 LEIGH FONDAKOWSKI: Actually, when we first went to Laramie, we weren’t necessarily planning to do a play. We went there with question of whether theater artists can play a part in the conversation going on in Laramie, so we weren’t even really sure the first time if a play could be written.

What happened with “The Laramie Project: Ten Years Later” was that Moises [Kaufman, creator of “The Laramie Project” and founder of the Tectonic Theater Project] was thinking about what had changed and what had not changed in Laramie, and sent us all an email asking if we would be willing to go back. Some of us still have close ties in Laramie: I’ve been back a few times; we were all back there when we performed the play; when we made the film, we shot parts of film in Laramie. There are still connections there, so a few of us agreed to go back.

What we thought we were going to do was create a little addendum to the play, a short epilogue, just catching people up on what happened to our characters and Laramie. As it turned out, we gathered so much material that we decided to write a whole second play. The two plays will run for the first time in rep, so it’s sort of a five-act play: three acts of the original and two acts of the epilogue.

BLAST: Do you think the new play can be performed alone, or does it need to follow a performance of the original “Laramie Project” to have an impact?

LF: The new play is a standalone piece, and it works even if you have not seen the original. But I think the impact of Matthew Shepard’s murder on the town and on the individual characters is felt more deeply if you watch the original play back to back with the new one.

We were there at so many moments when people were going through those incredible emotional, personal transformations, and we captured them. It’s a real journey to watch the plays back-to-back, but both plays can stand alone individually as well.

BLAST: How did you measure the change in Laramie during the interviews? It seems like it would be a difficult thing to do.

LF: We asked people how Laramie changed, how they had changed, and how they measure that change. It’s interesting because a lot of people in Laramie who were directly touched by this have changed in remarkable ways. Personally transformed. It’s a very specific, concrete thing they can say: I used to be more homophobic, or I used to think like this, and now I don’t.

Then there are more subtle ways that it plays out. For example, nobody even said the words “gay” or “lesbian” in Laramie before [the murder], and now they say, “We talk about it. We talk about it in our schools, in our churches, in our public spaces. You don’t hear people using the word ‘fag’ or other derogatory language you used to hear as a matter of course. It is different here.”

But the way we dealt with it dramaturgically was to say, okay, there’s all this personal, transformational change that happened in Laramie and the individual lives of the people, but how does change happen on the level of law? [Matthew’s mother] Judy Shepard says at the end of the epilogue, “Ten years of progress and no change.” She differentiates it by saying that there’s progress on the healing level, and then there’s change on a legal, protective level in society that is hard to manage. Obama just signed the Matthew Shepard and James Byrd, Jr. Hate Crimes Act recently. It’s taken ten years of laboring over these things to make it happen.

One thing that’s very surprising to people when they see the epilogue is the fact that people in Laramie are saying now — not everyone, but on a pretty large scale — that it wasn’t a hate crime. That’s one thing that sorrows people. People aren’t saying that at a National level, but in Laramie they’re saying, “Maybe it wasn’t a hate crime after all, maybe the media made it up,” as a sort of knee-jerk reaction to having their town tainted by it.

BLAST: “The Laramie Project: Ten Years Later” was read by hundreds of companies last year on October 12th, the 11th anniversary of Matthew’s death. What was the general response to that?

LF: The reading was pretty amazing. Part of what [The Tectonic Theater Project] did when we did the reading [of “The Laramie Project: Ten Years Later” on October 12, 2009] was to go out to different communities that were performing it and work with their ensembles, so we got to know the different casts and the some of the issues that were going on in the town. It let us see how personal the subject was for each town and for each person involved in the reading. There was so much overlap between and the town of Laramie and their towns.

For Tectonic to have this relationship with these casts and do the reading all together last year was really quite amazing. It was an incredible grassroots theatrical experiment. It was like nothing I’ve ever been involved in before. To me, the success of the 12th happened before the 12th.

BLAST: In an interview with Moebius last fall, you described the process of transcribing interviews into a theatrical experience using the term “moment work.” Could you explain what you mean by “moment work” and the effect it has in the writing and performance of the two plays?

LF: Moment work is a technique for writing performance that we’ve been using at Tectonic for many years and that I also use in creating my own work. Basically, you gather all the research, interviews and raw materials you want to create from. But you don’t just take the text: you also take the theatrical elements of costume pieces, simple set pieces, sound and video. You go into studio and begin to write using all the elements, not just text, and you make what we call moments. A moment can have to do with character, but doesn’t necessarily have to do exclusively with what the character says. It can be the way they wear their cowboy hat, or the way they walk, or certain music that’s playing or certain movements that happen. We created and staged “The Laramie Project” using moment work.

We haven’t done as much moment work to create the epilogue because originally we created it to be a reading. It was the first time we wrote something to work as a reading as opposed to a theatrical event. We created a play, and then went back and did the moment work in the rehearsal process.

BLAST: So the script has changed since last year’s reading?

Yes. The script has grown, been shaped and refined based upon the moment work we’ve done with the actors in the rehearsal process. It’s a conversation between the text and other theatrical elements that go into making theater. There’s an underlying philosophy that theater is not a literary form or a two-dimensional form: it’s actually a three-dimensional form that has its own language, its own way of living in space. We try to capitalize on what the theater can do best in the beginning, before we write anything.

BLAST: Moises Kaufman, creator of “The Laramie Project” and the founder of the Tectonic Theater Project, wrote an article called “The Anatomy of an Experiment,” referring to the epilogue. He said, “Is this [epilogue] a valid model that can be repeated or used in other situations? Or is it only possible because the original play was as well known?” After your experience of writing the play and the reading last year, do you have an idea of what the answer will be?

LF: It’s an interesting question: if you break it down and ask why the Laramie Project grabbed the attention that it did, and why do so many people want to do it — I’ve wrestled with that question over the years — there’s two things. One is that the characters in Laramie Project are relatable characters. You see them and feel like you know them because they’re so much like people all across the America.

The other thing about it is that there’s not really a vehicle, especially for young people in the theater, to talk about issues that are important to them. This play also becomes a way for them to express these political and social ideas.

Furthermore, on a theatrical level, a 15-year-old kid can play 52-year-old gay man in Laramie. Theater is a medium that allows for that to happen, which is very magical. If a play has all those components, I suppose [the epilogue experiment] could be reproduced.

BLAST: The Laramie Project has positively affected so many communities and individual theater-goers in the past ten years. Are there any particular audience responses that stick out in your mind?

LF: When we put on “The Laramie Project” in Laramie, the characters stayed for the talkback and commented on how seeing their lives reflected onstage and watching their journey represented theatrically gave them a feeling of closure and of completion of what they went through.

For me, that has always stood out: the power of the theater as a storytelling form. Especially when it has an opportunity to enter into the social discourse — which I think is very rare — differently from the 24-hour news media. A way in which we can step back and see the story unfold with more depth.