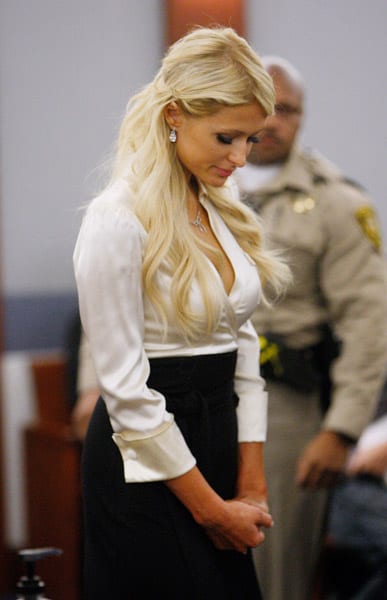 Paris Hilton appears in court at the Clark County Regional Justice Center September 20 in Las Vegas. Hilton pleaded guilty to two misdemeanors, drug possession and obstructing an officer, as part of a plea deal worked out with prosecutors following her August 27 arrest for cocaine possession on the Las Vegas Strip. As part of the agreement, Hilton will serve a year of probation, pay a $2,000 fine, serve 200 hours of community service and must complete a drug abuse program in order to avoid jail time and a felony conviction. (WireImage)

Paris Hilton went to Japan bringing all of her baggage with her.

Japanese immigration officials delayed Hilton at Narita Airport while they decide whether she will be admitted to the country after pleading guilty to a misdemeanor drug charge in Las Vegas after an officer found a small amount of cocaine in her purse.

According to Associated Press, Hilton was originally scheduled to appear at a news conference in Tokyo on Wednesday to promote her fashion line, but that appearance was canceled.

Hilton has reportedly been staying at an airport hotel while the matter is resolved.

According to the source, an e-mailed statement by Hilton’s rep, Dawn Miller, said she was stopped by immigration authorities upon her arrival Tuesday in Japan. "Paris was contractually bound to her business trip and didn’t want to let down her brands and many Asian fans," the statement said. "She intended on fulfilling her contract and is trying hard to do the responsible thing, but this is beyond her control. She is very disappointed by tonight’s events."

It was uncertain whether she will continue with her promotional tour, which was scheduled to visit several other countries, including Indonesia and Malaysia.

The promotional trip had been planned before Hilton’s arrest last month in Las Vegas. She pleaded guilty Monday to drug possession and obstructing an officer and was placed on probation for one year.