LOS ANGELES — The art of comedy is fairly simple: you’re either funny or you’re not. It’s not the type of genre that’s easy to fake, and with many new series this fall it’s a race for the next big hit. Last year, ABC struck gold with it’s unconventional and witty comedy, “Modern Family.”

This year, ABC hopes to add upon its success with “Better With You” written by “Friends” writer Shana Goldberg-Meehan. The pilot of “Better With You” is also directed by television veteran James Burrows whose previous work includes “Cheers” and “The Mary Tyler Moore Show.”

“Better With You” is a story about the Putney family told in three parts, exploring the dynamic of relationships at different stages. Mia Putney (Joanna Garcia) is the youngest of the Putney clan whose free-spirit lifestyle reflects the impulse of young love. Then there’s Maddie Putney (Jennifer Finnigan,) the reliable older sister who is happy in her secure relationship marriage or not. Finally there are the parents: Vicky and Joel Putney who after several decades of marriage show the humorous yet sturdy foundation through the good and bad. The series’ enthusiasm is contagious and the casting pitch perfect; the natural chemistry onscreen is what makes this new series hilarious.

Looking more into this series, Blast spoke to the “Better With You” leading ladies Joanna Garcia and Jennifer Finnigan.

BLAST: The chemistry between the two of you on the series “Better With You” is really great, how has it been working together?

JOANNA GARCIA: It’s been heavenly. We’ve known each other for years, actually. Always rooting each other on, and adoring each other. So it’s really nice to get this chance for the two of us to [work] together, of course it’s not just the two of us, there’s a lot of wonderful people on the show. At the heart of it, it’s nice to know you can go to work with someone you really trust and know.

JENNIFER FINNIGAN: And that’s it. Trust. Trust is such a big issue. We totally trust each other and we make each other laugh. We confide in each other too. This isn’t new for us either. We both have been doing this for a very long time. We’re old pros, and we know it comes down to good work and getting along. There’s no drama.

JF: There’s not that all all.

JG: Thank goodness! (laughs) And it’s nice, it’s always nice to be able to go to work and be happy.

BLAST: Your characters deal with some issues in their lives, and their love lives. What were your thoughts on the script? It’s relevance on your life or maybe your friends’ lives? How appealing was the comedy for you?

JG: When we read the script there was that initial notion we were doing something that was very relevant. I think for me, after being in this business for so long, you want to do something that you feel is relatable, that you can connect to and grow with … And in this medium it’s so fun to let yourself go and have fun. And to know that it’s no so far out there that only a small percentage of the country will get … we’re doing something that people can understand at all different stages of their romantic relationships. It’s [about] sisters and family, and all different dynamics. I think that’s why it works and fits well with this night [Wednesday]. ABC is doing a great job of throwing comedy that’s out there. And I’m really humbled to be [ and have the show] sandwiched in-between “The Middle” and “Modern Family”

JF: Me too! Those are some of my favorite shows! We’re kind of grounded in reality with this show. It’s not like a high concept, crazy [show.] And for me personally, I’ve been in a relationship for six years and married for three. So when I read the script I thought, “Gosh, I can kind of relate to parts of this script … ” like that young, hot, and new relationship; then that comfortable, loving, very nurturing relationship. The parents on the show, there’s this deep love but who have been together for years but they drive each other nuts. There’s times where I’ve been with my husband, and yeah we kind of drive each other nuts too but for the most part it’s very grounded and very loving too. When I read the script, I felt like I get this … I really get this. 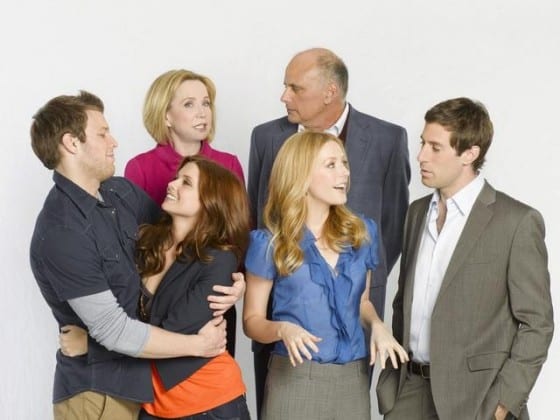 BLAST: You mention the cast, are there going to be any special any guest stars or appearances coming up?

JG: I think with this first season of the show they’re kind of focusing on just us [the main cast] but we do have some guest starring roles … for instance this week I think you get to meet Maddie’s assistant.

JF: Who maybe has an unhealthy attachment, or crush on me (Maddie.)

JG: So it’s really interesting to see how people come in and out. There’s a lot happening in our small nucleus [of a family.]

JF: But we should really get some funny guest stars.