My girlfriend and I went apple picking last weekend. We ate a bunch of apples off the tree, which were good. If you’re my Facebook friend, there’s a hilarious photo of us sharing a McIntosh.

When we had our fill of fresh fruit, we were looking for something to do with all those apples. And we didn’t want to waste them, either. At $18 per bag, we wanted to maximize our investment.

For some reason, neither of us much care for apple pies. That left us wondering what we could make.

This required calls to her sister and mother, but 45 minutes later, here are the steps to delicious, completely unhealthy, apple crisp. 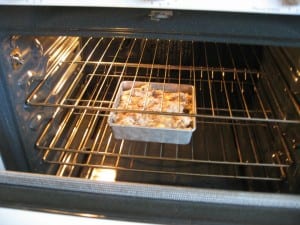 Preheat the oven to 350 degrees.

Skin and core the apples. Slice them thinly and arrange them in a deep baking pan.

Mix the flour, sugar,a nd cinnamon and pour the mix over the apple slices. Make sure they are evenly covered.

In a mixing bowl, combine the flour, oatmeal, and brown sugar. Take the stick and a half of butter and thinly slice it. Use a large fork to mix it all up until there is a consistency. Spread this all over the top of the apples.

Sprinkle about a teaspoon of cinnamon over the top of everything if you like cinnamon. (We do.)

This is easy. Anyone can make it. Just don’t make a habit out of it, because it’s just as bad for you as any cookie or cake.