Here are the books and videos coming out this week:

Russell Crowe once again shows his affinity for period pieces, but this time does so while evoking the spirit of the most legendary heroes in pop culture. With a cast that includes names such as Cate Blanchett and Matthew Macfayden, Universal pictures adaption of the classic tale in its original unrated format tells the tale of the notable hero and his band of men as they endeavor to fight the corrupt hand of the crown, and bring justice back to their country. (Universal, $29.98; Special Edition, $34.98; Blu-ray, $39.98)

Colin Farrell goes back to his roots in this modern fantastical film heavily based in Irish lore. When Irish fisherman, Syracuse (portrayed by Collin Farrell, of course) finds a mysterious woman in his net, he can’t help but feel that she is more than human. The appearance of Ondine (played by polish actress, Alicja Bachleda) brings him luck in fishing, but naturally, all good things come with consequences, as Syracuse soon learns. (Magnolia, $26.98; Blu-ray, $29.98)

Just in time for the premiere of the second season (September 23, 2010 at 8pm EST), Community’s first successful twenty-two episode season will be available in one box set. In the spirit of similar comedies such as 30 Rock and the Office, Community is filled with laughs, yet brandishes a cast filled with unlikely people. The Soup’s Joel Mchale’s starring role as Jeff Winger shows off his comedic talents in a venue other than his popular show, and trades puns about pop culture for the misfortune life of a disbarred lawyer attending Greendale Community College. Other peculiar faces include Chevy Chase of National Lampoon and Caddyshack fame, who portrays Pierce Hawthorne, a moist-toilette tycoon who serves as a sort of mentor to Mchale’s character. The show chronicles Jeff’s life at the community college dealing with all of the new people around him and his growing crush on fellow student, Britta Perry (played by Gillian Jacobs). (Sony, $39.95)

The Daily Show with Jon Stewart Presents Earth (The Book): A Visitor’s Guide to the Human Race

Once again, Jon Stewart makes his presence known in the publishing world with his new volume of parody, but America is not the only thing under the self-deprecating microscope this time around. In Jon Stewart’s new title, he takes a hilarious look at the world we live and what defines us as people, not just as one country, but as an entire planet. Just imagine Jon Stewart and everything that makes his show entertaining crammed into a book, a must read, right? (Grand Central Publishing, $27.99)

James Patterson is known for his ability to put out a mystery novel in what seems like, seconds. The same can be said for this title, yet another mystery book to put under his belt, and not to mention yet another product of partnership between two authors. The book depicts the murder of a mobster that takes place in a famous steak house in New York, but unbeknown to the murder, Nick Daniels is seated only inches away doing an interview with a legendary face in baseball. Nick manages to get a hold of an important piece of evidence that could be the key to the whole case, and parties on both sides of the law are eager to get Nick on their side, placing him in the middle of a mafia war. (Little, Brown, and Company, $27.99) 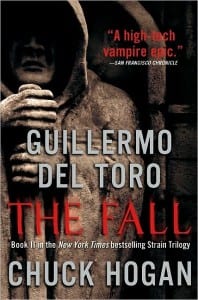 In the long awaited sequel to THE STRAIN, The vampire virus has taken over New York City, and is well on its way to taking over the world. The remaining survivors, including Eph Goodweather, CDC Team head, must band together to stay alive, and preserve what is left of the human race. Even if it means protecting the ones they love from those who used to be seen in that same regard. From the mind of the man behind Pan’s Labyrinth, The Fall is bound to be a creepy ride, and quench the thirst of anyone who is interested in the science fiction or vampire focused genre. (HarperCollins, $26.99)