Candace Charee is the official musical talent for the 2010-2011 Official Twilight Convention Tour, which is traveling throughout the US and Canada.

With her lingering voice and stirring lyrics, she gives audiences an unforgettable experience. Charee’s soul wrenching, poignant songs bring listeners into the bestselling love story of Bella Swan (played by Kristen Stewart in the films) and Edward Cullen (played by Robert Pattinson) as thoroughly as Stephenie Meyer’s Twilight books do.

Charee is currently working on two different music ventures. She has been to seven Twilight Conventions, performing her "alternative rock, big arrangement" Twilight inspired songs. She is also working on producing a "dance, pop album." In the last two years, Charee has acquired thousands of loyal fans and over one million hits on her music.

"I really connected to how they (Bella and Edward) felt about each other," Charee said. "It’s the ultimate love story; and I was hooked, inspired immediately after reading the first three books."

The 27 year-old performer started singing when she was 12 months old. "My mom wrote in my baby book that I would be a singer before I was even born," Charee said. "My mom predestined me to be a singer." 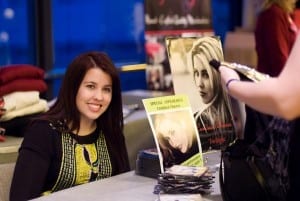 However, after living in Nashville for ten months, Charee returned home for a family emergency. She remained a few weeks, telling her family she wouldn’t move back unless she fell in love. "Two days later, I met this guy; and it was one of those love at first sight type of things."

After dating for six months, they broke up. "I gave up my music for him. I stopped working, and it took me a long time to get over that."

It wasn’t until Charee reluctantly agreed to read a book series about a vampire who sparkles and the human he loves just as desperately as he craves her blood, that Charee found the inspiration to write music again.

"I was instantly, madly, obsessively in love with Edward Cullen," Charee exclaimed. "I couldn’t eat; I couldn’t sleep; I was a total Twihard. All of sudden, I was inspired to write. I had all these ideas and feelings. I needed to write again."

So after reading the first three books in just five days, Charee sat down at her piano and wrote her first Twilight song, “The Smell of Your Skin.”

"When I’m really inspired by a story, I can write a song in an hour. I’m blessed that way,” she said.

From there, Charee took her song to Saltmine Studios in Phoenix. She posted her song on MySpace, and two days later she had over 10,000 hits.

"Most of us married a long time don’t feel that same first love kind of feeling (that Edward and Bella have) anymore. Twilight was a story of being in love with somebody who was the total non-convenient relationship and everything it takes them to be together — it’s just the ultimate love story," Charee explained her attachment to the series. "I really connected with how they felt about each other, a love that’s amazing and totally unrealisticâ€¦We all long for that."

While Charee originally wrote The Smell of Your Skin wanting it to be on the Twilight movie soundtrack, she now sees it working in (Spoilers) the Breaking Dawn film’s honeymoon scene.

"When he’s (Edward’s) in the water with his back to her (Bella) and she’s walking toward him, I think this song would work great there," Charee said. "The scene, it’s so sexy and kind of emotional; and so is this song."

"I want to become a good role model for women," Charee said. "A lot of women struggle with self-esteem, and I feel like I have a lot to offer to them. In a year and a half, I’ve done with my career what it takes most years longer because I have a positive outlook and knew I could do it. I really want to help women and men be positive and love themselves and get out of this self-hatred crap."

Charee’s second song, which was sung with Josh Leon, was written for New Moon and has almost two million hits on YouTube. Never Erase not only captures the deep struggle both Bella and Edward face when he leaves her in the second book, but it elevates audiences to feel such a level of genuine commitment that even novices to the Twilight world will live the heartbreak of Edward and Bella’s breakup.

Charee’s third Twilight single, Escape the Rain, was also written for New Moon. Charee brings the heartbreak millions felt through Bella as she chased after Edward alive through music.

"All the songs are so emotionally different for me," Charee said. "I have personal relations to all of them. But I would probably say most beautiful is Escape the Rain. It’s one of the most emotional, that and Silent Misery."

Jacob Black (played by Taylor Lautner in the films) was not left out of Charee’s inspiration. In fact, the songwriter finds it impossible to choose Team Edward or Team Jacob.

"I love both of them in their own right, and if I personally had to chooseâ€¦" her voice drifted uncertainly. "Wowâ€¦that’s a hard one!" she exclaimed. "They’re so different. I mean I don’t believe that you only have one soul mate, and Bella has two soul mates. She’d be perfectly happy with either one," she hesitated. "I’m Team Both," Charee finally decided with a laugh.

Charee’s final Twilight song, Silent Misery, was written from Jacob’s perspective. The song was written for the final scene in the Eclipse book, which will probably be included in the first part of the Breaking Dawn films. Jacob receives an invitation to Bella and Edward’s wedding.

"He freaks out and transforms into a wolf. He just runs," Charee explained. "He has to get away from that pain; and that’s where this song comes from."

Charee’s CD with all four Twilight songs is available at conventions and her website – http://www.wix.com/candacecharee/candace-charee. Charee does not plan to write more Twilight inspired music.

Charee has done seven Twilight Conventions, and should be attending all dates except Dallas, TX this year. At Charee’s first convention, Phoenix August 2009, she was nervously waiting backstage for the rest of the band when Michael Welch (Mike Newton in the Twilight films) walked in.

"I had a total fan moment at first!" Charee said happily. "He was the first Twilight star I met. We started talking; and he was really, really nice." Charee invited Welch onstage. "He was so excited to come on stage; it was really cute." Charee’s fan girl reaction has worn out, and now she looks at Welch as an equal.

"He’s an awesome dancer," Charee said. "He’s really fabulous and a very, very talented singer; but you don’t always notice it because he sings really silly, going for the comedy of it. But he’s really great."

"It’s all a dream come true," Charee said appreciatively. "It’s amazing, looking into an audience whose never heard me sing before and then after I do a song, the excitement in their faces, that approval that I get from them makes me feel like I’m still doing the right thing."

In addition to her four Twilight songs, Charee performs her pop music at conventions. Two tracks from her upcoming pop album are available to listen to online — Comin to Getcha, written for the new dating TV series Cougars, and Restitution.

Charee’s pop album, which will have at least ten songs, has a style quite unlike her Twilight music. "Each song has a different feel, a different emotion. They’re upbeat, different; but the Twilight community has been really receptive of my other songs," Charee said.

Right now she is focusing on finishing her pop album, getting on the radio and selling records, touring, and making friends with her fans.

"The best thing about doing performing is the new friends that I make. Pretty much everyone that is a fan of mine turns into a friend," Charee said. "I think it’s more important than having a bazillion fans that don’t know anything about me. Creating personal relationships with fans, that’s one of the most gratifying things I can do."

"I want to continue doing music inspired by amazing books and movies," Charee said. "Gravity has a different feeling than my Twilight stuff. The story is quite different, but the song still came to me rather quickly."

Gravity is a piano ballet, and a demo will probably be released in the next month on Charee’s MySpace.

"The best thing (about my career) has been being on the Twilight tours," Charee said. "Meeting all of the new people and the friends that I made just from the tours, it’s just the best thing and really the most rewarding."