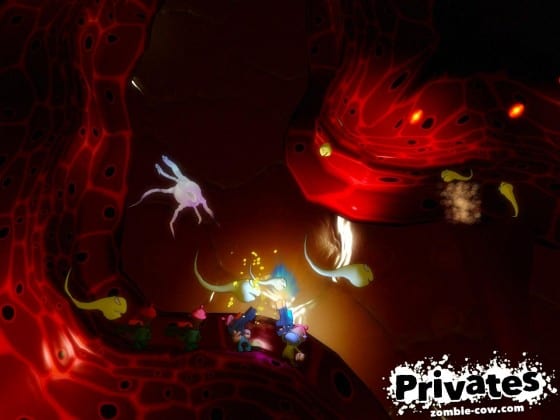 Oh, you haven’t heard of Privates?  Here’s a quick summary, you play as a group of mini-soldiers; complete with condom hats as they enter every (yes…every) crevice in the body to combat STDS and other health issues. No, really. Hey, at least it teaches kids about safe-sex.

Since its announcement, the game has always been amidst controversy, as the guidelines for users submitting indie games on Xbox Live include a no sexual content clause.

Still, Zombie-Cow’s Dan Marshall has nothing but positive things to say about the Xbox Live Team. “The guys at Xbox have been amazing," said Marshall. "They’ve been really supportive and helpful throughout, but ultimately have advised that the game wouldn’t pass the Indie Games peer review process, purely due to its inherently sexual natureâ€¦ It’s a shame, but it’s something we’d always pretty much assumed would happen."

Those who still want to blast Chlamydia a new one can do so via the game’s PC release. It’s just a shame as kids are now going to have to learn about the birds and the bees somewhere else, like you know…TV, Movies, kids at school, cartoons, comic books…