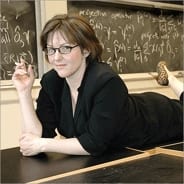 CAMBRIDGE–How many ex-mathematicians does it take to write and perform a hit play?

Gioia De Cari’s "Truth Values" opened last year at the Central Square Theater to rave reviews and a week added to the run. One year later, after two sold-out stints in New York and San Francisco, she’s back by popular demand. It doesn’t take a mathematician to analyze those statistics, and De Cari backs it up: this one-woman tour de force blasts through our often unconscious misconceptions of gender and academia with honesty, wit, and energetic exploration of life’s variables.

Although the story is intensely personal, any thinking person will be enticed by its universal themes as well as by De Cari’s effortless impressions of (and interactions with) the 20 plus characters she takes on in the academic circus. An audience largely populated by the MIT community offers a unique context, worth taking advantage of, including cues to laugh at select math jokes (did you know that mentioning "number theorists" is funny?).

What De Cari presents is not a rant against injustice. "Romp," in fact turns out to be accurate. It’s a unique journey of self-discovery with unexpected results that lead her to question the nature of truth. In fact, the concept played with in the show’s title of applying numerical values to truth could have been more directly explored. The show’s greatest strength, the intimacy with which De Cari relates her personal experience, could at times be its greatest weakness. When she gets personal without broadening her points with analysis, she comes off as the kind of funny friend relating a hilarious or heartbreaking anecdote over lunch, whom we care for, but eventually feel a strong urge to walk away from But those parts are few and far between. To apply that description to the whole show would be irredeemably reductive. There is no absence of theatricality in her performance or points of interest in most of her stories.

Lawrence Summers, former Harvard University president, made remarks as recently as 2005 regarding the inferiority of women in the sciences, which De Cari mentions in "Truth Values." I was fortunate to be able to attend the performance after which Nancy Hopkins, the M.I.T. biologist who walked out during that speech, participated in the talkback. She astutely pointed out that "if someone had made those remarks about another minority in the field, they would have been fired immediately." Summers, however, has been promoted to Director of the White House National Economic Council. As De Cari deftly illustrates in her writing and performance, events like these cannot go unaddressed.

For that reason, it is highly recommended to stay for a talkback if possible (September 19, 22, 23). The Boston community is rich with academic anecdotes from all perspectives. "Truth Values" achieves dialogue in a vital and entertaining fashion: precisely what good theater should do.