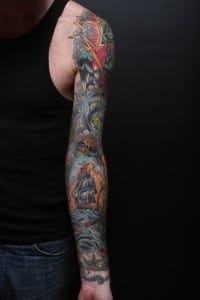 Luckily, Boston area residents have Redemption Tattoo, named Boston’s Best Tattoo Parlor by the Boston Phoenix in 2010, City Voter in 2009, Boston Magazine in 2008, and WBZ-TV in 2007. And thanks to Redemption’s new website and portfolio images, both those contemplating getting ink for the first time and those looking to add to their heavily decorated “sleeves” can take a peek at what Redemption has to offer. Arranged by artist, the site’s portfolios show off the artists’ beautifully detailed work, from colorful dragons and peacocks to a ridiculously realistic portrait of Abraham Lincoln.

Mike Shea, who co-owns Cambridge’s Redemption with Erick Lynch, attributes the parlor’s success to the high quality of work produced by passionate, talented tattoo artists. “There’s no attitude when you come into our shop,” he said, “we just want to do the best tattoos for our customers, plain and simple." And if you’ve never gotten ink, don’t fear. “We don’t care if you’re covered in tattoos when you walk in or if you’re coming in for your first tattoo and need a lot of guidance,” he said.

Shea says that tattooing is the best thing that has ever happened to him, and his love for it doesn’t stop when the shop closes for the day. “Everyone at Redemption works hard at the shop and then they go home…and draw designs for their upcoming appointments. It’s definitely a lifestyle, not just a job,” he said.

The new website, which will soon feature a tattoos blog, is the next step in Redemption’s overall goal, which, according to Shea, is “to be a staple in Boston tattooing and set the standard.”

To view the artists’ portfolios and get more information on Redemption Tattoo, go to RedemptionTattoo.com.