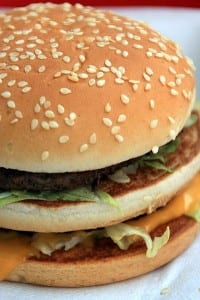 American eaters are very serious about their hamburgers. In fact, it would be hard to imagine a more American food than the all American burger.

Now, after sampling those sought after sandwiches from dozens of chain restaurants, Consumer Reports has named the McDonald’s hamburger the worst-tasting burger.

The magazine surveyed 28-thousand people nationwide to come up with the rankings on a ten point scale. Of course, not every hamburger chain was covered in the survey. For example high end chain The Counter was left out of the survey. Five Guys and In-N-Out Burger topped the list. McDonald’s biggest rival Burger King came in tied for next to last place in burger taste tests.

So, why do McDonald’s burgers score so low? My discriminating burger palette tells me reason number one that the Golden Arches fail the taste test would be that their ground beef patties are frozen. When meat is frozen, the freezing process pulls the natural moisture out of the meat. So, when the meat is defrosted, much of that natural moisture "runs off" leaving a drier, less rich tasting product.

Second, because of the speed in which McDonald’s, or any other fast food burger restaurant has to serve their burgers, the patties are cooked ahead of time. Who knows how long that burger has been sitting there in the warming unit? Even though McDonald’s, Burger King and the rest of the chains have standards on how long they hold their burgers, it would be reasonable to assume that the burgers are not "cooked to order".

From a quality and taste comparison, it would be hard to compare a McDonald’s burger (especially their "Dollar Value Menu" hamburger, which has a much smaller pattie and distinctly inferior taste to their higher end burger offerings) to a Five Guys or an In-And-Out Burger as in both of the latter restaurants, the burgers are almost always cooked to order. Of course, you pay for this higher quality and better taste in higher prices and in longer cook times. At either Five Guys or In-And-Out Burger, you’re looking at up to 10 to 15 minute cook times. Can you imagine sitting in a McDonald’s drive thru for 15 minutes, without threatening to McFlurry the kid behind the window? So, certainly convenience, speed and price, rather than taste, have a lot to do with McDonald’s burgers selling billions of their burgers each year.

On the other hand, why do McDonald’s fries continue to do so well in taste tests? McDonald’s fries are frozen as compared to Five Guys whose fries are fresh cut. In the old days, though, McDonald’s fries were also fresh cut and fried in a blend of beef tallow (fat) and cotton seed oil that made the fries delicious. My spies deep within the Mickey D’s organization (OK, a high schooler I know who works there after school) tells me that McDonald’s fries are made with a "natural" seasoning that duplicates the taste profile of the original fries cooked in beef tallow. I’d also theorize that human beings’ tastes are determined in the first years of their lives. So, after generations of Americans have been raised on Happy Meals, we are programmed from toddlerhood forward to love McDonald’s fries.

What makes Five Guys and In-And-Out Burger score so well with those surveyed? Both serve fresh ground beef cooked to order and served on freshly baked buns, but, moreover, at both of these places, you can pick whatever combination of ingredients you desire to top off your burger. Hand leaf lettuce, fresh cut tomatoes, saut©ed mushrooms, saut©ed onions, raw onions and lots more.

Americans have strong opinions about what makes a great burger. And, it appears that Five Guys and In-And-Out have the right recipe for success; instead of quick and pre-fabricated, burger barons want their fast food chains to start off with great quality ingredients, and then let them "have it your way" when it comes to putting it all together. Hmm, haven’t we heard that jingle somewhere before?