The mark of a good Coen brother’s film is that you get the feeling as you watch it that the plot could take place anytime, anywhere, with anyone as its protagonists, all without sacrificing the meticulous character development and sense of place that makes their films great. They are directors who get to have their abstract cake, and eat it too.

Nowhere is this more obvious than in "Blood Simple," a devious little film they made early in their career that took a classic noir story line (a rich man pays someone to murder his cheating wife) and turned it into a meditation on marriage, humanity and our own violent tendencies.

Director Zhang Yimou, apparently, wanted in on the action. Yimou, along with writers Jianquan Shi and Jing Shang, allowed their adaptation "A Girl, a Gun and a Noodle Shop" to reflect and embrace the spirit of "Blood Simple" without simply retreading old territory. The result is a gorgeous, magnificently controlled, and, yes, devious little film, with a nightmarish quality and gory finish only Yimou can provide.

It is the same noir story line: a rich man (Dahong Ni) pays a travelling mercenary (Honglei Sun) to kill his wife and her lover. This time, our bloody microcosm takes place in what appears to be 18th century rural China, in a roadside noodle shop in the middle of an endless and ever-changing desert. 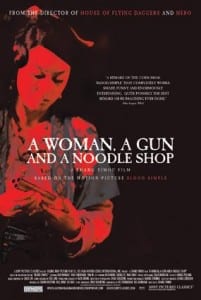 Yimou’s work is not easy to love. There’s a shrillness and deliberate discordance (particularly with sound) that won’t appeal to everyone. I wondered if there was a cultural disconnect in some of the images, particularly the foolish lover Li (Xiao Shen-Yang) who is literally dressed in what appears to be a girl’s pink pajamas and stocking cap. And it’s hard to stomach the other Fool of the opera, Zhao (Ye Cheng), who looks like a World War II-era caricature of an Asian person (Buddha belly, huge buck teeth and eyes that are simultaneously childish and demonic).

The characters and their costumes might be overblown, but damn if they don’t look gorgeous on the screen. Ni Yan is especially wonderful to watch, commanding the screen as the young, abused and unnamed wife with a emerald green dress and vicious, haunted eyes. And Sun, as the mercenary Zhang, gives a smart and understated performance, with the intelligent and soulless eyes of a shark.

But the real star is the set on which Yimou has placed his pseudo-Shakespearean tragedy. The desert surrounding the noodle shop is both the site where the lovers meet and where one or two of the characters end up buried. The space is empty and hostile, reflecting the sun so fiercely in the daytime that the viewer is made to blink. The noodle shop itself, with it’s trapdoors, and spare rooms and countless doorways seems more like a set for a stage performance than a film. In the middle of that timeless desert makes it seem like the violence we are seeing is happening nowhere. And if it could happen in this Nowhere, it could happen Anywhere. Catching the spirit of “Blood Simple”, and of the Coen brothers’ milieu in this fashion is the true mark of Yimou’s insight. How he reimagined it is the mark of his genius.