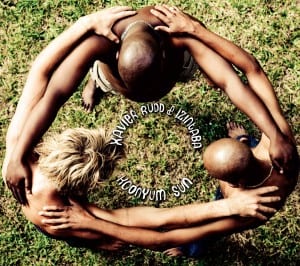 SAN DIEGO — For Americans, Xavier Rudd is not a household name, but his latest album, "Koonyum Sun," might change that.

The Australian singer/songwriter has a worldwide following, and is exposing a generation of Beibers, Swifts, and Gagas to a totally different sound.

Rudd’s sound is eclectic and expertly layered with a wide variety of instruments, including the didgeridoo.

In "Koonyum Sun," Rudd collaborates with South African artists Tio Moloantoa (bass), and Andile Nquezelo (formerly of Lucky Dube’s band). Together Rudd, Moloantoa and Nquezelo create an organic fusion of music that is at the same time moving and energetic; the message within the album is equally as strong. Social issues, human rights and the environment are just a few things Rudd touches on in "Koonyum Sun."

Rudd has been in described by some as Sting meets Dave Matthews. But make no mistake, when Rudd and company take stage, he is in a class of his own.

Blast caught up with Xavier Rudd in California during his North American tour.

BLAST MAGAZINE: The title of your album is called "Koonyum Sun." For people who may not know what that means, could you explain it a bit?

XAVIER RUDD: Koonyum Sun. Well Koonyum is a range, a mountain rangeâ€¦in the area of New South Wales (Australia.) When I recording the record, I was up there, and I spent a lot of time sitting by the fire, writing and reflecting. The sun would light up the range in the morning then sink behind in the evenings. And I felt like the album was about the Koonyum sun.

BLAST: And that’s what’s so interesting about this album. As far as your last one, "Koonyum Sun" is different in tone. What inspired you as far as the concept with this album, especially after collaborating with Tio and Andile?

XR: I think it’s been more of a spiritual thing since we met. Our cultures are similar but very different. I draw a lot of inspiration from my [Australian] original culture, which has connections with the South African theme. It’s like our ancestors put us together, that’s how it felt. And it’s been like that with the music as well, so I draw a huge inspiration from them. I think that’s been the driving force of it.

BLAST: The interesting thing about the song, "Koonyum Sun" are the lyrics mentioning your 9-year-old son. In that song we hear a child’s voice. Was that your son singing in it?

BLAST: How was it working with your son in that song?

XR: It’s been cool. He actually was the instigator of that song. I was playing that riff over, and he started singing that line:

If you could see exactly what I could see/You see it’s a great mystery.

Then I started singing my verses around that actually. He’s a special one, that one.

BLAST: The environment and different social causes are clear in your songs, especially with "Koonyum Sun." When you work on an album where do you start from? Does it begin with a song, an idea, or maybe improvising on various instruments?

XR: Songs just come, I don’t try to sit and write them. Everything is a part of it. Everything is part of that process from life, emotions, and spirit to the instruments.

BLAST: In "Koonyum Sun" you’re listed as Xavier Rudd and Izintaba. What has the process been like collaborating with Tio and Andile? Have they helped inspire the style of this album too?

XR: I bring the songs, but the way they play is so heavy and so beautiful. There’s a lot of life that they bring to it.

BLAST: Do you feel you know yourself better now as an artist than before with your previous albums? Because sometimes the music industry likes to mold and categorize their artists to their tastes.

XR: I don’t think I ever have [been molded] and I think that’s why the industry hasn’t recognized me too much because I’m a live artist. I do my thing, I sort of have my cult following. I get played on the radio, but pretty rarely. I’m not commercial. I like it. I think people recognize that I’m real. I don’t do music because what I think people want to hear, or what songs people think others want to hear. It comes from my heart. It’s been that way ever since I’ve been a little boy. I’ve never changed that. Real people come to my shows, good people, and that’s a gift. It’s a good unit, it’s like a family unit; that’s how it feels everywhere I go. And that means more than anything I could get from a worldwide hit.

BLAST: Some have compared your sound to Jack Johnson and Sting. In your own words, how would you describe your music?

XR: I don’t knowâ€¦I can’t stand outside my music because I’m so far in it, you know? I can’t look out it and compare it to anything. It’s spirit moving through heartâ€¦that’s how I feel about my music. It can’t be the same as everybody else’sâ€¦it’s a great compliment to be compared though.

BLAST: Your album, "Koonyum Sun" only came out early this year. Are you working on any songs now for future projects?

XR: I’m writing some interesting stuff now. Real bright, kind of bouncy; we’re going through some different places. I don’t know how others will think of it, but I’m excited about what I’m writing.

BLAST: You’re very environmentally and socially conscious — are there any groups or causes close to your heart right now?

XR: Yeah, it’s called Save the Kimberley. The Kimberley is a [wilderness] area in Australia which is under threat. The [group] works to bring awareness about the land, to preserve it from being [industrialized].

For more show information you can visit: http://www.thewilburtheatre.com/