SEATTLE — Sony brought a few Move titles to show off at the 2010 Penny Arcade Expo, and with both of the major new motion technology being released soon it was interesting to see what would be available for titles. 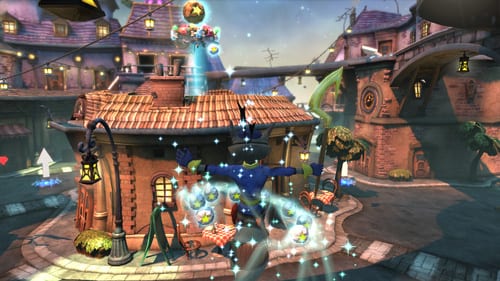 One of Sony’s new Move titles is cleverly called Heroes on the Move. You play one of the famous characters: Sly Cooper, Ratchet, Clank, Jak, or Dexter. This is a party title, with short quick games to get a group of people into it.

I was able to play through two levels of the game. The first one was a modified bowling game. The player bowls a ball in the level, then uses the controller to direct the ball to roll in certain directions to hit all the enemies on the board. The ball keeps rolling until it falls off the map. There are bumpers and ramps on the map to help direct the ball in the direction of the enemy units that must be destroyed.

You move the controller up to jump over things or to get it to get to higher areas. The level that I played was fairly easy, but was still fun. The character could also be moved around the board to other starting locations to help get to different spots, like to bowl behind where it started. The controls took small motions to nudge it in different directions, and felt a lot like a Wii Game.

With the glowing orb at the end of the Move controller it was able to very accurately track all my movements, since it knows the exact dimensions of the ball, it knows how far away it is by how big the circle is, and can tell moving forward, and backwards as well as from side to side, and up and down.

The second level I got to play was one where you could throw a disc around to hit the targets. The disc stops when it hits a wall or other object that isn’t breakable. The discs also stop if you try to go to high with them too fast — they stall out and fall to the earth. This level had a limited time and a limited number of discs. As you’re destroying the enemies, you have to also collect more discs and time bonuses to keep going.

Overall the game was fun, and I would enjoy playing it as a friendly party game, and it has potential as a family title. The only complaint is it did feel like a game more designed for the Wii, just using Sony Franchise characters.