Any film about Israeli soldiers is inherently drenched in politicsâ€”it’s just the way things are. Even so, "Lebanon," directed by Israeli, Samuel Maoz, and set during the 1982 conflict between these two nations, could take place during almost any conflict in which young men were placed together in army tanks and rolled into a combat zone. It’s not historical interpretation, but a claustrophobic nightmare depicted with scarring starkness and grit.

What you mostly see is the inside of a tank. You see close-ups of sweaty, dirty faces, stealing their owners through fear. You see dark metal walls and of filthy brown puddles on a metallic floor. You see small, circular images through the viewfinder featuring sand, rubble, feces, animals, filthy buildings and people, some of whom are threatening, and others of whomâ€”women, children, elderly, shouting, wounded, stunned and desperateâ€”may or may not pose a direct threat.

You also hear the thundering mechanical swivel and click of the turret, a sound which may haunt your dreams, and you can almost smell the mixture of body sweat, dirt, shaving cream, cigarettes and urine that must permeate the tank’s interior. 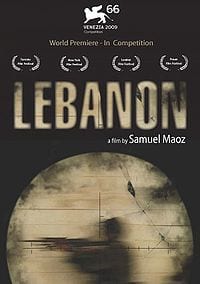 In as much as this film has a plot, it explores the conflict between the tank’s four crewmen: there is the leader, who struggles to keep command of a mission of which he is entirely unsure; the jumpy ammunition loader who questions his commander’s every word; the driver, who requests permission that his mother be called; and the gunner who cannot seem to bring himself to ever pull the trigger. This sounds like the cast of a comedy and indeed their predicament is so darkly absurd that sometimes one cannot help but laugh, but such laughter comes more out of defense than pleasure. Still, it is the characters that make this film survivable. Even if we’ve never been in a battle, we can all relate to the struggle of being forced to rely on people we don’t trust, to mask and repress our animosity and fear of failure. "Lebanon’s" complex and believable bands of tank mates do so with great pathos.

This is the view of "politics" on offer, politics on the most micro of levels, the politics of four men of differing status and rank in a tiny crate attached to a giant gun. "Lebanon," which recently one the Leon D’Oro at the International Venice Film Festival and the Satyajit ray Award, is less of a commentary than an experience. It’s not an easy one to have, but it’s certainly affecting, certainly one you won’t soon forget.