Based upon the novel "A Very Private Gentleman" by Martin Booth, who also penned the screenplay, this film is not about the life of an assassinâ€”the moral equivocation, the tangled web of shifting allegiance, the thrill of the hunt, the skill of the precise and furtive killâ€”rather, it’s about the aftermath of such a life. It’s about loneliness.

As such, this is a quiet film, light on words and dominated by images of wide-open negative spacesâ€”a Swedish snowscape, burning white; an Italian village carved into a mountainside; an open field by a stream in that village. The film’s few gunshots crack and echo. Its love scenes smolder in a spacious bedroom awash in hot red light.

George Clooney plays the film’s thinly drawn subject, a lithe figure with a mysterious butterfly tattoo burned between his shoulder blades, his hair and beard more salt than pepper. We know that he’s quick and sharp with a gun. We know that no one who discovers his work survives. We know that it involves gunsâ€”both using them and selling them. That’s about all we know.

On a job in a remote, Italian locale, he struggles to keep a low profile. While, we are led to believe, his discipline in this regard was once suburb, now he seems to be slipping. A pushy, slightly-too-perceptive priest (Paulo Bonecelli) muscles him into a kind of friendship. A hooker-with-a-heart-of-gold (Violante Placido) draws him in a bit too close. Both seem to be pursuing what is left of his soul, not knowing that shadowy predators are closing in on his body. 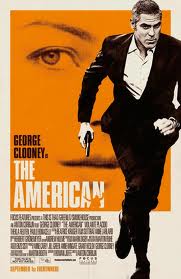 Betraying a quiet longing with his clenched jaw, his voice a bristled a growl, Clooney is a formidable presence in this film. He has to be. Because while it has elements of suspense and the threat of danger, "The American" is far from an action thriller, and while its subjects sometimes follow their lust and dream of something more, it’s not quite a romance.

One brief scene in the film finds Clooney temporarily distracted by a spaghetti western blaring from a caf©’s TV. This is a genre whose themes seem complimentary. A man alone, quick with a gun, living outside of the law, weary of standoffs and pursuits, yearns for the chance to get paid, get out, and settle down someplace far from the trouble. But it’s never that easy.

Ultimately though, while it nods to several, "The American" is less a genre film than simply a moody, often visually beautiful, study of loniliness.