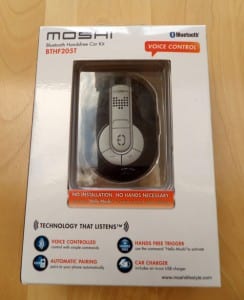 The use of cell phones while driving not only poses a danger for yourself, but for everyone else on the road as well. Hand-held cell phone use while driving is distracting and its no wonder many states are prohibiting it while driving.

Currently eight states including: California, Connecticut, New Jersey, New York, Oregon, Washington as well as the Virgin Islands and D.C now have laws prohibiting drivers from using hand-held cell phones while driving. In Boston, young drivers can’t be caught on a cell phone and no one is allowed to text while driving.

You will need to pickup a hands-free device to avoid a hefty ticket if you get caught.

Moshi feels they have the right handsfree calling solution to keep you safe while driving, allowing you talk on your cell phone handsfree with their Bluetooth Handsfree car kit. So you’re probably wondering what exactly is it?

Basically the device is nothing more than an advanced speakerphone about the size of a standard garage door opener transmitter, just like the one that attaches to your visor. But don’t let this fool you because it does much more than act just as a speakerphone. The device ships with integrated Bluetooth, so as soon as you get into your car, it will automatically connect to your cell phone and give you the ability to dial and check basic phone status information like battery life, signal strength and allow you to place calls using the built in voice command system, all hands free.

Once you pair the device up with your phone, just say "Hello Moshi" to activate the voice commands and your able to say commands like "redial," "call back," "call favorite # 1-5," "call home," "call voicemail," etc.

I found the device to work very well. Callers were able hear me clearly and vice versa and the voice recognition picked up on what I was saying almost every time. I was also impressed to see that the device recognizes voice commands even from a long distance away. Battery time is also decent with six hours of talk time and 40 hours of standby time. 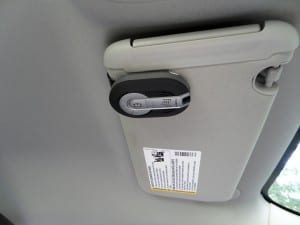 The device ships with the Moshi Car Kit, magnetic visor clip, car charger and a manual. I was impressed with the design and build quality of the accessories. Normally this isn’t something I pick up on, but I do like the design and how they incorporated in a magnetic visor clip instead of using something non-detachable like plastic. The device removes easily from the visor clip and it is a breeze to bring it inside your home or to switch it out from car to car. The included USB car charger is also a nice plus since it uses standard USB, which can be used to charge other USB devices you might have laying around in your car like a maybe a cell phone or iPod.

There were a few things I didn’t like about the device however. One being that you don’t have the ability to say extension numbers for the device to dial. You also can’t disconnect from a call without pressing any buttons. I also wasn’t pleased when receiving a call from someone in your contacts, the device doesn’t say call from (Persons Name here); instead, it will just read out the person’s number. I found this annoying because I don’t know everyone’s number and I rely heavily on my phone’s contact book for numbers. Finally, I would have liked to have the ability to play my own custom ringtone or jingle rather than having the voice prompt’s machine voice tell me I have an incoming call.

Overall I would recommend this device to anyone looking to go handsfree. Setup was simple, it took less than a few minutes and once the product was paired to my phone, it worked great and connected no problem every time. Another added plus is the compact size and weight of the product. Its almost the exact size of a garage door opener so you can practically charge it up, leave it there and forget about it.

The product is available for $79.99 at moshilifestyle.com.