I remember wondering why my theater’s poster for this movie was blank. Turns out there was very little worth showing, nothing you haven’t already seen in cops and robbers movies for as along as you’ve been watching them.

Speaking of which, is it really that entertaining at this point in history to watch a bunch of well-dressed guys steal the money people have entrusted to banks? Haven’t we just spent the past two years feeling like we’ve been ripped off by a gangs of cocky suits with no morals?

"Takers" suffers from an abundance of problems: the all-too-familiar, clipped, tough guy dialogue over a pump-up soundtrack, Matt Dillon as a flavorless L.A.P.D. detective (he bucks his bosses, is loyal to his partner, squints, and grits his teeth), Hayden Christianson as apparently some kind of tough guyâ€”but the heart of the problem is in fact, a sympathy gap.

The best American crime movies — Bonnie and Clyde for example, play on moral ambiguity. We know stealing is wrong, but on the other hand, it’s attractive to watch someone break the rules in a particularly ballsy or clever way, and suddenly have enough money to make their dreams come true. In fact, the fantasy plays into the American Dream myth: work hard at something, take a big risk, be inventive and you can transcend class extremely quickly. Robbers become rugged individualists who distinguish themselves from the herd by aggressively claiming what they want without following anyone else’s rules. It’s fun to spend a couple of hours imagining that this could workâ€”and cathartic to see that in the end, it can’t.

"Takers," however, doesn’t mess around with moral ambiguity or the meaning behind crimes and punishments in any interesting way. Its gang of thieves, Jake and Jesse Attica, (Michel Ealy and Chris Brown) Gordon Jennings (Idris Elba) John Rahway (Paul Welker) Max (Gaius Charles), and A.J. (Hayden Christianson) should have it made after they pull off a nearly flawless heist in the film’s first few scenes. They celebrate in style, and as Jake tenderly proposes marriage to his girlfriend (Zoe Saldana) in the dim blue light of a lavish hotel bar, over strains of soulful piano jazz provided by gang mate, A.J., they start to get a little interesting. They seem like o.k. guys who did one bad thing. 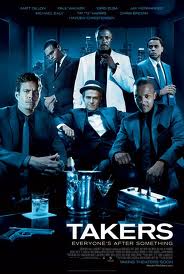 Then Ghost (T.I.) shows up. He’s a shadier-seeming crook who, it turns out, went to prison working on one of their last jobs (apparently they did more than one bad thing). None of them trust him, but when he offers them a shot at another big payoff in the form of an armored car robbery he’s been orchestrating from prison, they deliberate for about two seconds (it’s a against their rules to do two jobs in the same year) before one of them takes the bait and pressures the others who fall like dominoes.

The second they do, you know more or less how the next hour-and-half is going to go. They’re going to regret their greed, turn on one another, probably loose at least a guy or two. The worst part is though now that you’ve already seen what they’d do with the money and then watched them fail the moral test, there’s no reason to care very much about what happens next. Of course Matt Dillon is hot on their train as tough L.A. Cop, Jack Welles, but there’s not much to care about there either. It’s like watching two countries you’ve never heard of compete in the World Cup: there might be a few minutes of good action, but is it worth it if you don’t really care who wins?

I will say that Chris Brown (who is hard to root for other reasons) is given one very long, very cool, on-foot chase scene, in which he bounds in and out of buildings like Spiderman. Once that ended, so did my interest in the movie.