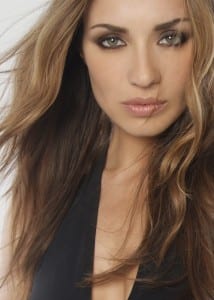 When we heard that we were going to have the opportunity to interview a budding cinema starlet, we were intrigued.

When we heard that she played the damsel in a popular film franchise with horror themes, we were ecstatic.

Then we found out it wasn’t Kristen Stewart.

Yes, they are making another “Saw” film. With that…

BLAST: You work alongside Tobin Bell and other notables for the upcoming latest installment of SAW movies: SAW 3-D. What did you previously know about the SAW movie “franchise”, and its preceding films?

Rebecca Marshall: I knew that SAW had a very respectful track record and is one of the all time great horror franchises. Tobin Bell and the entire cast have continued to entertain and keep the audience on the edge of their seats. There is a huge following for horror films and I know there are loyal fans of Saw movies from the 1st one to the last.

BLAST: “Saw 3D” is the 7th installment in the series. What does this release offer that will help it stand out from the earlier films?

RM: 3D film making has really taken off.  I was terrified watching the previous Saw films in theaters. Now you can really have that personal effect and feel like you are in every scene.  It is the final installment of this franchise and the creators don’t disappoint.

BLAST: You’re joining an ensemble cast which includes Tobin Bell (SAW), Sean Patrick Flanery (Boondock Saints saga, Powder) and others. What do you feel you’ll bring to the table? 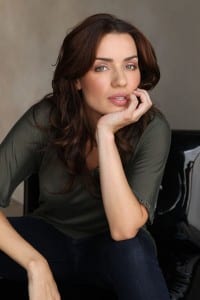 RM: “Saw” has had a very talented cast throughout the years.  I think that I bring a new fresh face to the franchise and a lot of energy and creative talent.  I am very grateful to be apart of this film.

BLAST: Making the jump from television to movies is a common, albeit difficult move — Johnny Depp, Leonardo DiCaprio, etc. Do you see your career, once a steady, safe grind in network prime time, emerging on the silver screen?

RM: Absolutely.  As actors we all need to take risks and step outside of our comfort zone.  We have the best of both worlds and are able to do both film and network prime time.   I would love to make a transition similar to the actors you have mentioned.  I am ready and willing to put in the time and effort in to be great.

BLAST:  With the recent awakening of 3D technology in home entertainment, the demand for 3D movies will be at an all-time high. If the numbers on opening day at the box office are less than expected, do you think it will be made up for in the Blue-Ray/DVD sales?

RM: I truly believe the box office sales won’t disappoint and fans will be supportive.  This is one movie they will want to experience in 3D on the big screen.  It’s an event people will want to be a part of.

BLAST: When you look back on your performance in this film, will you have considered it your “break-out” role?

-With that answer in mind, do you fear being typecast as a “scream-queen”, as many young Hollywood actresses who star in horror films are?

RM: I definitely think this is a great start for me in film.  I am not worrying about being typecast either. The term “Scream Queen” has opened a lot of doors for a lot of actresses that I admire.

BLAST: How was working with new editor-turned new director Kevin Greutert on the film?

RM: Kevin is a true professional. It was a joy to work with him and he will continue to make great movies that people will enjoy.  He made me feel very comfortable and I hope I have the pleasure of working with him again one day.

BLAST: What other projects do you have on the horizon?

RM: I have two indie projects that I am starring in.  One is called “The Actress" I am really excited about it because it is a totally different character then I usually play.  She is very strong and dangerous.  I am also working on an upcoming comedy that I get the chance to be a producer on.  It’s  a first for me.

So, if you don’t have trick or treating to do, you’re friends are saying they aren’t partying this year, and the power goes out everywhere except the local Regal Cinema, “Saw 3D” opens October 29.