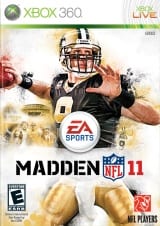 Madden 11, featuring cover-boy natural Drew Brees,  is available today after a rather rocky reception to the demo several weeks ago. It features a new ‘Strategy Pad’ that houses all pre-snap options in a single place, but the mechanic was maligned by many faithful for being slower than the previous system and offering no option to revert back. The vintage pre-snap controls will be patched into the game shortly after the beginning if the NFL season, but, for now, players will have to just have to grin and bear it.

This year’s version of the game features numerous tweaks designed to lower the barrier to entry for new players. It has a dummy play-calling system called Gameflow which is supposed to guide you through the game in a hurry without sacrificing strategy. Players are able to dictate the way Gameflow calls the game by using ‘Gameplanning’ as well. This feature allows you to assign plays to certain situations for the Gameflow brain to pull up when those situations arise.

Another notable addition to this year’s game is a new feature called Online Team Mode where up to six players can jump into a lobby and pick sides.  Players decide to be responsible for different components of the game – QB, rushing, receiving, pass rush – and can decide to play free-roaming characters as well. This feature seems like it will be super-fun with friends and has a lot of potential. I play the NHL version of this and it is a very good time. It will be interesting to see how Madden’s take plays and is received.

Finally, Madden 11 will place much more emphasis on the right analog stick, as many of the evasive moves that previously used buttons are now mapped somewhat more intuitively to the stick. It seems to be the way of all things.

So, to the many proud Madden- freaks of the universe on this day, I say, “Have a glorious time with your new toy! And, I hope you don’t get caught by your boss.”