Considering how awful the recent Michael Bay Transformers movies have been, and the fact that there’s surprisingly never been even a halfway decent Transformers game ever made, I expected precious little in regards to popping Transformers: War For Cybertron, into my Xbox 360. (It’s also available for the Ps3)

Well, I’m glad that my pessimism didn’t pay off this time, because not only is Transformers: War For Cybterton not an abomination like the aforementioned Michael Bay hack-a-thons, it’s also a game that will supply gamers and Transformers fanboys a few hours of mindless fun. 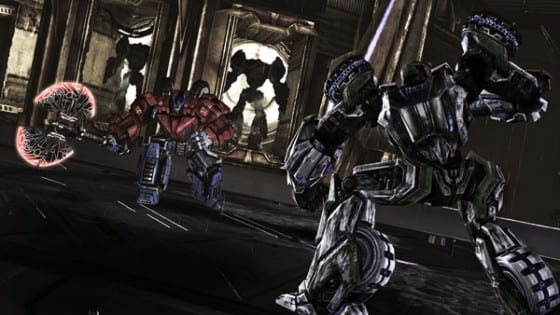 Simply put, War For Cybertron works, because it steals from other successful game franchises. Those being, the graphics being powered by the Unreal Engine 3, and more importantly, the shameless lifting of Call Of Duty: Modern Warfare’s multiplayer. But more on that in just a bit.

The story mode for War For Cybertron is set long before the events of the Transformers: Prime television show. It’s split into Autobot and Decepticon missions, and one has the choice to pick either side from the beginning. From there, each level allows you to pick one robot from a pre-set group of three who each have their own class, like Leader (Optimus), Soldier (Bumblebee) and Scout (Ratchet). Truthfully, the missions for both sides showed little variety, but that’s not necessarily a bad thing as each mission is basically just “blow the hell out of everyone”. Still, despite the countless generic robots you’ll mow down, you do eventually battle or cross paths with Transformers you do recognize, and when those moments happen, you’ll probably find yourself wishing that the whole game could be like that, much like I did. Don’t get me wrong. The levels are good, but I just think with a little more effort, they could have been great. 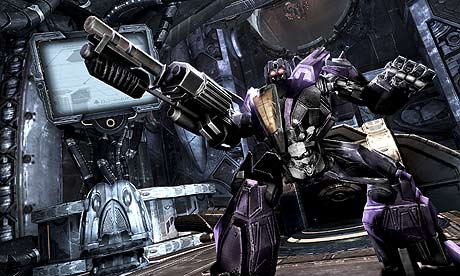 So, about the multiplayer that *ahem* liberally borrows from Modern Warfare. Well, from limited customization of your character (ooh! I get to make my guy a different color?!) to the perks, to the leveling system, things will look real familiar. However, those somewhat useless “classes” in the single-player mode make much more sense when playing against others online, because real live people know what the hell they’re doing, and can utilize the advantages of using a sluggish Soldier over a quick n’ nimble Scout. The standard checklist of multiplayer modes are all represented here, from deathmatch to capture the flag, but where Transformers: War For Cybertron really shines is their version of Horde Mode, called Escalation. Waves of robots attack you and your teammates, and you earn points for each kill. You can then in turn use said points to heal, buy weapons, or reload during breaks in the action or in the middle of a battle. Not to mention, this is the only part of the game where you’ll get to see some old favorites that aren’t in the story mode, like Shockwave and Jazz.

The Blast Factor: Look, if you need convincing in regards to this game, let me just sum it up like this. Transformers: War For Cybertron is this year’s Batman: Arkham Asylum. Just another movie/comic book based game that everyone and their gaming brother thought was going to be terrible, but ended up being really, REALLY good.

And if that doesn’t do it, well, Peter Cullen (The voice of Optimus Prime) is in the game and spouts enough awesome, overly dramatic lines that makes it worth the price of admission alone.