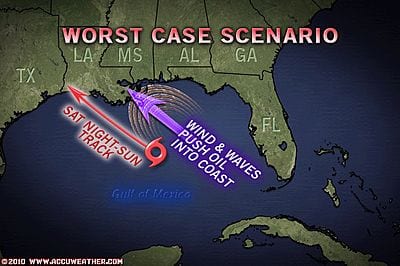 STATE COLLEGE, Pa. — AccuWeather.com — A tropical depression tracking west-northwestward between Cuba and the Bahamas will eventually reach the northern Gulf of Mexico, moving part of the oil spill onshore.

AccuWeather.com meteorologists expect Tropical Depression 3 to track between South Florida and northwestern Cuba Friday and into the eastern Gulf of Mexico this weekend.

From there, a continuing west-northwest path is forecast at this time, a track that would mean a near-worst case scenario for driving oil inland over the Mississippi Delta in Louisiana.

In this track, east to southeast winds averaging 30 to 60 mph with higher gusts would drive the oil onshore.

The many marshes, estuaries and channels in the Delta Region could act like a sponge trapping the oil for a long period of time.

Wave action, on the order of 5 to 10 feet or more, would be too much for protective booms to handle. Waves carrying oil would over wash the booms. Winds and waves would push the booms onshore with the oil.TD 3

A major hurricane taking a similar path would be the “worst case” situation.

However, fortunately, the AccuWeather.com Hurricane Center does not expect this system to become such a monster. Instead, the system is forecast to fluctuate as a tropical storm with only a slight chance of reaching a minimal hurricane at this time.

In addition to clusters of thunderstorms and squalls rotating through the northern and eastern Gulf of Mexico and adjoining coastal areas from Florida to Louisiana and Texas, conditions will become progressively more stormy in this area this weekend.

Oil slick cleanup and containment crews and officials, as well as operations on other wells in the region are advised to take the necessary precautions.

Tropical systems over open waters can suddenly pulse or a squall with hurricane force winds can hit with little notice.

We can only hope the system remains weak, minimizing the push of oil through the Delta.

AccuWeather.com Hurricane Expert, Joe Bastardi says there is still a possibility of the system turning more to the northwest, over the Florida Peninsula. This would mean different winds and less impact on the oil spill area and more rain and squalls for central Florida.