SAN DIEGO – The big news about Halo: Reach to come out of this year’s San Diego Comic-Con? You’ll now be able to play Firefight as the Covenant. There’s a  new armor ability called Hologram, as well as a slick new Halo: Reach 360 Slim model hitting stores to coincide with Reach’s release. Also, not to be outdone, Bungie debuted something truly amazing for the creative crowd called, Forge World.

In addition to the full Firefight matchmaking support previously announced for Reach – a feature which was very noticeably absent from Halo: ODST – fans of wave defense will now be able to slay human characters en masse, feeding their latent alien blood-lust for hours on end without the necessity of knowing 3 other people ready to do the same at any given time of the night or day. This will be part of a 2-on-2 versus mode where a Covenant invasion force attacks lone Spartans with AI troops. Once all lives are lost by the Spartans, the sides switch. The new Firefight gets its icing with a never-ending Grunt-hunt mode called, Gruntpocalypse.

There was also the announcement of  ‘Forge World’ with a mind-blowing ViDoc  you can see here (link also features an unboxing video of the new hardware). In this total re-imagining of Halo 3’s Forge, the geniuses at Bungie have gone out of their way with to make the Halo map-making interface a far more robust and accessible experience. A slew of  locales will be available to tinker with that are actually all interconnected into one immense environment. The new mode features a staggering number of objects to place and manipulate, as well as many new and improved ways to do so. It was mentioned that when putting down a teleporter, for example, the player will be able to decide exactly how big they want it to be and which objects are allowed to pass through it, etc. The detail I found most compelling was that Halo: Reach will include a number of levels that developers created in the very same Forge World that ships with the retail title – a true indicator that users will have exactly the tools they need to make their Reach experience whatever they can imagine it to be. 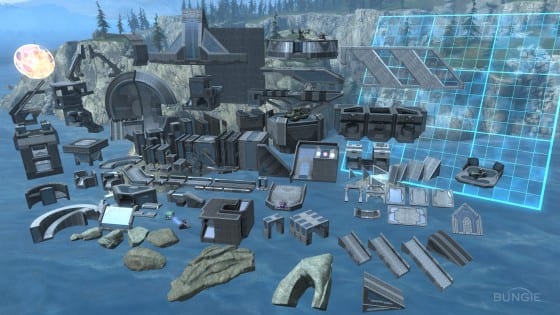 Think you can handle it?

For their finale of what was likely one of Halo: Reach’s last big reveals before the game hits shelves on September 14, Bungie pulled back the curtain on the Halo: Reach Xbox 360 Slim Limited Edition. It comes complete with 2 custom controllers, all modeled to look like authentic pieces of hardware from the Halo universe. The demo unit was then given away to one sickeningly lucky audience member at their Comic-Con panel. Be assured that it is sufficiently beautiful. The only drawback is you don’t have nearly enough time to save up for it. Price is TBA, but you’re probably ready to steal your grandmother’s jewelry to get your hands on one regardless. 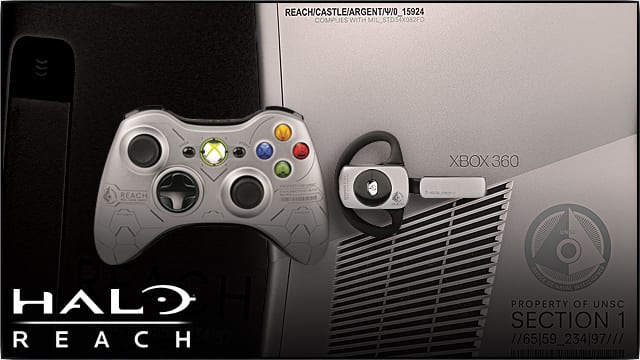