There are few people who love dogs as much as I do. That said, there are also few people who have seen as many disgusting, muddy, untouchably filthy dogs as I have. As a dog walker in Boston for two years, I learned that the city is a veritable playground for pups, filled with nasty puddles to jump into, bursting-full trash bags to pounce on and not to mention, other dogs to sniff.

The general life span for a collar for my city pup, Toby (a Boston Terrier), is about a month. Toby can turn a bright, thick, durable collar into a limp shreds in no time. This normally wouldn’t be a problem, except that for a poor college student, it gets a little expensive. So that’s why I was thrilled to hear about a new kind of collar from Dublin Dog. 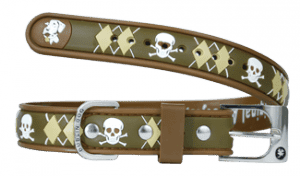 Dublin Dog has invented (yeah, invented) a 100 percent waterproof collar that, because of its design, doesn’t harbor odor-releasing bacteria. Basically, the pitch is that you can let your dog do its worst to this collar, and then throw it in the sink and it’ll be as good as new. So of course I had to try it.

Toby seemed to understand that he needed to put the collar to the test. After strapping it on (it even looks durable, made of thick rubber with chunky metal accents), I gave Toby full reign, and two months, to test its limits. 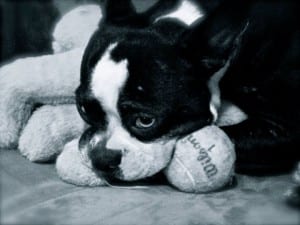 Toby, after a hard day's work

Toby may be a small dog, but his adventurous spirit is extra large. Toby and his collar took a swim in the smelly Charles River; they dug up flowers; they wrestled with other dogs in the dog park; they rolled in puddles; they barreled down hiking trails in the Fells; and at the end of the day, I could just run warm water over the collar and it would be good to go all over again. Toby, however, was a little more difficult to clean.

It’s now been three months since Toby’s had his collar, and there’s not a scratch, stain or bite mark on it. I never wince when taking it off, because the material makes it so almost nothing can affect it. Not to mention the fact that there are a lot of fun, bright color and design options, and I’ve never gotten more compliments on a collar (I picked the Chai Latte design — a pinch of preppy, a pinch of bad-ass). I’m just praying Dublin Dog starts making dog toys.

Make sure to visit DublinDog.com to order your collars, leashes and tshirts!