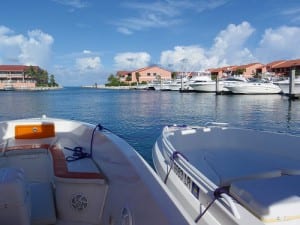 ALICE TOWN, Bahamas — Fifteen fortunate Floridians were 50 miles away from Miami, but they were much farther than that in spirit.

On a steaming-hot Saturday last fall, they were in Bimini, the westernmost district of the Bahamas, sailing on two 30-foot white Contenders that trailed a yellow catamaran from Big John’s Marina to Honeymoon Harbor, a secluded sandbar in the district.

The crews were tough but hungover.

It was early afternoon, but felt like dawn, really, after last night’s bar crawl and junkanoo, a musical street parade. The caravan rode easily over the calm sea; the rays of the sun pierced the ocean’s surface and pin-balled off the shallow sea floor, illuminating an underwater light show that was either cool or spectacular, depending on the sunglasses being worn. Every color of the spectrum from lemon-lime to royal blue fought to outshine all others as the dominant blue-green shade.

Honeymoon Harbor was only one downed rum and Coke from the starting point at Alice Town, the populated part of North Bimini. The tiny, half-moon shaped harbor — normally quiet, peaceful, and vacant — was within easy reach of the entire fleet that had crossed the Gulf Stream for a vacation weekend.

Nearing the harbor, the catamaran’s captain, noticed that The Concrete Ship, a half-submerged shipwreck, popular for fishing and snorkeling, was surrounded by more boats than ever. A lot of people had come to Bimini this weekend, many more than usual, even for a long summer weekend, when the weather is typically better for crossings.

Artist Guy Harvey’s resuscitation of the legendary Big Game Club was one possible reason for the influx of boaters, having reopened that weekend after a long closure, and drew a large crowd. Another factor that may have contributed to the large number of visitors was the growing popularity of Bimini Bay, a giant new development that had displaced precious mangroves. The mangroves had been, since the founding of Bimini, the birthplace of practically every species of fish in the area. Fishermen and environmentalists agreed that it was the most asinine spot for development since the home built on Indian burial grounds in the movie Poltergeist. Calamitous oceanic repercussions were guaranteed. Nevertheless, folks flocked to its pastel townhouses, and this glorious Memorial Day Saturday, whatever the reason, saw markedly more marine traffic than usual.

When our flotilla reached Honeymoon Harbor, we found that there were 80 vessels, rather than the typical dozen or less, already in port. The leading catamaran slowed to idle speed and cautiously weaved around hulls, anchor lines, and swimmers. The trailing Contenders traced her line until they all reached an open patch. Veterans of the Miami sand bar experience, the three captains and their respective crews, quickly secured side-by-side anchorage. With that, it was time to refresh the rum drinks, reapply sun block and climb the cat’s tower to assess the situation.

Honeymoon Harbor is what it sounds like: a beautiful place for doing nothing. The sandy bottom of the waist deep water is patrolled by docile stingrays that languidly cruise around anchor lines.

Even the rays seem to be doing nothing but enjoying the weather.

A semi-circle of rocky brush and eroding beach provides shelter from rough, deeper water. The sun rises over the Bahamas east of the harbor, and sets over the Gulf Stream to the west. Without humans at Honeymoon Harbor, there is no sound. Today, there was the cacophony of a dozen stereos blaring 12 different musical genres within earshot of our setup. The Toots and the Maytals Pandora selection was overpowering, even for those on board.

Still, were relieved not to hear any reggaeton.

It did not take long for things to get weird. On our port side, an elegant, 35-foot cruiser arrived with a man dangling from its bow, clutching the anchor like Tarzan on a jungle vine, as the captain zigzagged for several minutes. The man intended to hand-place the anchor, but the indecisive skipper took him on a tour of the harbor instead. Off the starboard side, a 31′ open-fisher with an obscene 1,200 horsepower engine sported a tacky paint job advertising a boat painting service.

And there were beautiful women everywhere.

That cat’s passengers, four mid-20s sophisticates in designer bikinis, hit the bow to tan and resume their “oh, no, she didn’t, I don’t gossip but” girl-talk. Some industrious guys sorted gear so two tenders could trek to nearby spear fishing grounds. The ladies, and the remaining, already useless guys, stayed to catch sunburns and a buzz.

Directly astern, a group of adolescent girls stood on the bow of a 45-foot Hatteras yacht and started setting and spiking a volleyball.

The ball took less than two minutes to hit the water. An eager, pudgy boy, the lone male with these older girls, unmistakably their mascot, Carped Diem and hurled himself over the railing to rescue and return the ball. The girls laughed and applauded and knew instantly, psychically, that the object of their game was now to wear this kid out with fake clumsiness. Like the first person who threw a stick and had it returned by a nearby terrier, the breakthrough was too obvious to miss. The kid might be part Jack Russell considering the tireless commitment he proceeded to show.

Then the music got incredibly loud; 10 times louder than any other music. The first notes of the Black Eyed Peas song, remixed Miami style. All the way across the harbor a purple speedboat had hauled out twin Shaq-sized speakers to blast every other speaker-set into submission. The track had an extended lead-in, which was memorable because technical difficulties repeatedly cut it off after 45 seconds, only to have it resume from the beginning every few minutes as they troubleshot the problem.

The sun punished the Purple Speedboat with relentless heat, making everyone else collateral damage. Still, nine other boats tied onto the Purple Speedboat, perplexingly validating the strategy. Two boats over, another speedboat featured a one-armed fat man in the classic Miami jet-ski-ninja uniform. He had the wife-beater, gold chains, long black shorts, and shades with fluorescent-tipped neck straps. His buddy’s goatee demonstrated an even greater commitment to the look. They were accompanied by six thick but proportional, provocative, shot-pounding Latinas in thongs. There was a pang of recognition and civic pride, like seeing a Dolphins jersey on a tour bus in China. “That’s… from home!”

Suddenly a gorgeous, light blue, 38-footer carrying, at minimum, one teenager-per-foot, glided triumphantly into view. Kids were hanging off the T-top or grooving on coolers like featured strippers. Its sister ship materialized behind it with an equal number of Kalik-clutching teens (a Bahamas-made beer).

Any Miami water-cop would have sacrificed a two ton drug seizure to be the one to bust these kids. He would have had to quit the force the next day; his ultimate dream scenario achieved, he’d never feel fulfilled as a water-cop again.

Comfortably outside anyone’s jurisdiction that cared, the teens’ floating party proceeded unencumbered all afternoon. As did everyone else’s, as all basked in warm water for swimming, with cold beers, or whatever, to drink. Throughout the harbor, assorted individuals tossed Kaliks to waiting, wading belligerents. Boisterous and joyful conversations rambled everywhere as the sun angled down towards the horizon, the heat assault gradually relenting.

Honeymoon Harbor is a hotspot of chill like Starbucks is a hotspot of WiFi. It is a positive energy source. Ridiculously drunk revelers can connect to the source and stay somewhat coherent. It is a place where everyone is their best, or at least their most relaxed self, and therefore everyone’s company becomes immensely enjoyable. Strangers form fast friendships with easy banter, while old friends need few words to express and process their deep, mutual affection. They are free to communicate, at last, without the normal distortion of life’s anxieties.

The hours did not fly by, nor were they long. Honeymoon Harbor was hijacked by the Miami element for an afternoon, but it did not lose its essential chillness.