Although the heyday of blaming the Grand Theft Auto series of videogames for the commission of real-world crimes has mostly passed,  this little nugget has emerged from an incident Saturday night in Raynham. Two youths, a 12 and a 16 yr old, were arrested for allegedly trying to set fire to a garage and an apartment building with makeshift Molotov cocktails. The younger of the pair claims they got the idea from playing GTA 4 prior to their early morning graffiti spree that commenced with a laughable attempt to blow up a couple of buildings.

"They appear to have crossed the line from virtual reality to reality," said Police Chief Lou Pacheco, wasting no time in assuming GTA 4 as an absentee co-defendant. Not surprisingly, the Chief had little to say about the fact that these children were given the opportunity by their parents not only to play this very violent and mature game they have no business playing, but also to be driving around at 4am with a head full of bad ideas.

Fortunately, these two are not the most capable of criminals as the boys appear to have made the wicks out of flame-retardant material from a chair cover. They also neglected to realize that a Molotov cocktail only explodes and causes real damage when you break it.

Following the arrest, the boys were arraigned in juvenile court on charges of possession of an explosive device and attempted arson. They were then released to their families, who will probably now sue 2K Games instead of re-evaluating their lives and taking responsibility for what horrible parents they are. 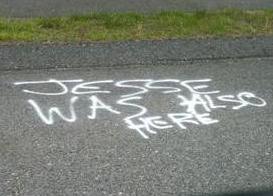 A piece of graffiti from the incident featuring what is presumably one of the kid's real names...