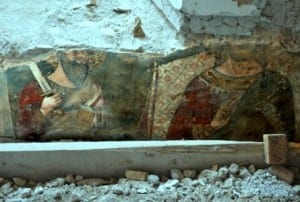 ROME — Behind the yellowed wallpaper in one of Rome’s no longer used municipal offices, a discovery was made. What has come to light is probably a Triumphant Christ with his faithful followers Peter and Paul portrayed in a medieval triptych recently discovered in a tower of the Senatorial Palace on the Capitol.

The characters in the fresco have survived centuries of neglect. The only part that remains perfect is a portion of the Saviour’s face not scratched by the mallet of the mid-20th Century anonymous workman who created the chase for the electric wires, removing the eyes entirely and leaving only the portrait of the full mouth and the perfect triangle of the neck with the task of portraying the afterworld beauty of the God who became a Man.

The amazement when faced with the crumbling wall that revealed the hidden treasure was an extraordinary event, a scene from a novel. It was the removal of the floor in the capitol office that allowed the art historians of the Municipal Monuments and Fine Arts Office to find themselves standing in front of the paintings that decorated the tower of Boniface IX (1389-1404).

The frescoes date back to before the reign of Boniface IX and are evidence of the immense hidden legacy that is to be found all over Italy.