The game is interesting in the connection between the game, your computer and your mobile phone. They claim they are going for a "constantly connected game." The game will allow the player to make video’s and then upload the videos to their site. Then their friends can watch the video’s and vote on them. They get updates on their phone from the votes. They are claiming that 1 million views on their website really make you a rapper. Konami’s logic leaves out the question of people liking a free video, vs paying for a CD. I’m interested to see whether anyone will become a real rap star after making it big on their site, will be interesting to watch for.

Russel Simmons is promoting the game. He believes that this is an area that has been ignored. He also talked about the benefits of hiph op, even claiming, that one "benefit of hip hop, we have president Obama."

Their next title was Lucha Libre AAA: H©roes del Ring. They will be releasing a wrestling game based on the Mexican Wresting style known as Lucha.

There will be a new Saw game, called Saw 2 Flesh and Blood, where they will use the same style as the original, having victims, like a doctor in a free clinic stealing the drugs. This game will use not only Togen Bell’s voice, but his likeness for a character also. The main character this time will be the son of Detective Tap, though they added an interesting part that not all freed subjects will greet you with open arms, "unless they stab you in the back."

Ninety Nine Nights 2 will come out June 29 with an online leader board and the ability to kill even more enemies with one attack than before. They are labeling it as an "extreme hack and slash title." Though they are enhancing the gameplay so that you can’t simply repeat the same move forever.

A new 2D side scrolling game will be coming to the US. It’s called Otomedius and it’s excellent. This is aimed at both the hard core shoot-em-out genre, or for new players to this space. This game is similar to Gradius, and Parodius. 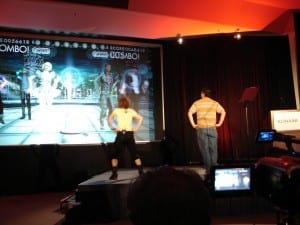 Later, Konami introduced a slightly different game, Dance Masters for the Microsoft Kinect. Up to two players can be on the screen at once. You can move your body freely. The game instructs the players on how to move by putting silhouettes on the screen for how the player should be standing at the next spot in the music. The game allows the player to save the dance scene and show it off to their friends, or use it to have backup dancers for their next time.

The next titles weren’t discussed just mentioned. From Hudson, a Bey Blade game, coinciding with the re-launching of the TV series. Decca Sports 3, and for the Kinect, Decca Sports Freedom.

There will be a new Silent Hill game, this time the main character is a Criminal on the run, that wondered into Silent Hill.

Kojima Productions introduced one of the new Metal Gear Solid games, called Raijin. This one will all be about swords and cutting. The game allows you to cut in precious ways. They show this off by having the character cut up a watermelon into slices. They also made the game allow the player to take parts, or absorb energy from your enemies. They made this with some strategy by making the player decide on what to take from the enemies. The options to take from the enemies are parts, energy, or information. They also improved the Stealth on the game from the Stealth used by previous heroes. There is no hiding on the ground, it’s a Hunting Stealth. The Story takes place between MGS2, and MGS4, and will describe how Riding got to become person he is together.

They next showed off info on the two new Castlevania games. The first, Harmony of Despair, is interesting and a little different. There is a big screen composed of many individual screens for the action. The game uses the HD TV’s to have 10million dots on the screen. Each individual screen is more like the familiar 2D platforms, but the enemies can follow you from screen to screen. The game allows the player to jump from screen to screen, but the enemies can follow you also. They are working it to add more features if it sells well. Starting with five playable characters, but add more and add more stages if it sells. This is scheduled for release on XBLA this summer.

The last video they showed was for Castlevania Lords of Shadow. That is scheduled for release this fall, on PS3, and Xbox 360. Not much more information was given on this game than the video.