It’s difficult to pigeonhole London-based quartet Mumford & Sons, and that in itself is the crux of their appeal. Frontman (and group namesake) Marcus Mumford’s singing style is distinctly British, both in his self-deprecating lyrics and the accent with which he pronounces them, but the words are sung over foot-stomping chord arrangements that draw heavily from more typically American styles like country and folk.

The group’s members themselves don’t have a concrete description of their music — just don’t call them a bluegrass band.

"Because we’ve got a banjo in our band, a lot of people think, right, they’re a bluegrass band," Mumford said in a recent interview with Blast. "But we definitely don’t claim to be (one), because firstly, none of us are good enough musicians to call ourselves a bluegrass band."

"Our country is immersed in Americanized culture. â€¦ The most popular films are all American made, and the same with a lot of music," he went on. "When we were growing up, those influences were very present in the sort of cultural tapestry that made up what we lived in. â€¦ "(But) I wouldn’t say (our influences are) exclusively American music. British pop, like The Kinks and The Beatles, we look up to them just as much as we look up to any of the American songwriters that we love. So we’re a real hybrid blend, I suppose, of different types of music." 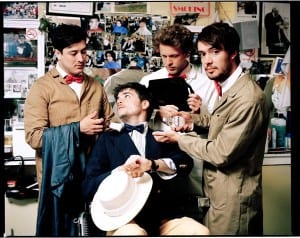 The recipe appears to be working. After releasing their debut album "Sigh No More" in the UK last October and in the U.S. in February, the band (Mumford, "Country" Winston Marshall, Ben Lovett and Ted Dwane â€” all multi-instrumentalists) recently concluded a headlining U.S. tour and left a trail of buzz in their wake. Their single "Little Lion Man" has also made a dent in American alternative radio playlists, and they’re slated to team up with one of their idols, Ray Davies, on the Kinks’ singer’s collaboration album later this year.

Just three years ago, the future musicians of Mumford & Sons were all unknown fixtures on the London music scene whose paths crossed in the summer of 2007. By that fall, they were rehearsing together as a group, but unsure as to what kind of sound they were trying to hone.

"All four of us came from slightly different angles, musically," Mumford said. "Ben and I played in a jazz band together. At the end of school, I got really into country music. â€¦ Ted was playing a lot of blues. He’s a blues guitarist, really, by trade, but had also picked up a double bass. And Winston had been teaching himself the banjo and got really into some bluegrass music."

They decided to just mix everything together and chose the band name in order to evoke an old-timey British family business. Other acts soon began to take notice.

"How we became a band, really, was just through other bands inviting us along for the sake of fun, really, and just saying, â€˜Come and play some gigs with us,’" Mumford explained. "That’s why we really take our live gigs very seriously, and we take what bands we tour with very seriously. Because a gig can be an entire experience from start to finish, not just like a focus on one band."

Supporting them on their American tour earlier this year was Australian outfit The Middle East, but the "pay it forward" approach extends beyond touring. Wanting to retain artistic control of their material, they self-produced three EPs and formed their own label to release "Sigh No More" independently. Mumford said they’re "definitely" interested in signing other acts.

"Not so much taking them under our wing so that we can have any kind of ownership, but more just, like, we were given so many steps up along the way when we first started as a band that we love the communal aspect of it, the community aspect of the music that we play. Musically speaking, a lot of the styles of the music that we love, like jazz and folk and blues, are very communal. They’re very based on relationships and that’s what inspires a lot of the music â€” not just kind of locking yourself away in a room and, you know, cranking out lots of different types of sounds and a song is made. The songs that we make are a result of rubbing off or being rubbed off on by lots of other people."

"No one quite knows what’s happening to the music industry. It’s kind of a changing world," Mumford said candidly. "We like the idea of being owners of (our music), and being in control of it, and having approval over everything, so that, in 10 years’ time, any mistakes we make along the way, we can say they were our mistakes. They weren’t mistakes made by people on behalf of us. That’s a distinction that is quite helpful for our mentality. I mean, it puts slightly more pressure on us â€¦ but we kind of like the idea of doing it more in that way, and then to team up with people who are really good at their jobs in other areas.

"Being in control and owning the record, at the end of the day, makes you the team captains," he added. "We have quite a large team now of people and record labels. Worldwide, we have a mix of major and independent record labels that we work with. They’re just really great people, and we got to pick them all. We got to pick our best team, which was really great. We’ve had some wonderful advice and some wonderful help. â€¦ We’re very, very lucky in that way."