LOS ANGELES — David Jaffe, the mad genius behind the creation of Sony’s epic God of War and Twisted Metal franchises, announced this week that he would be leading the charge in re-imagining Twisted Metal for the PS3. One of the best loved games for the original Playstation, Twisted Metal hit a much darker note on the PS2 with Twisted Metal: Black, which appeared very early in the PS2’s lifespan all the way back in 2001. 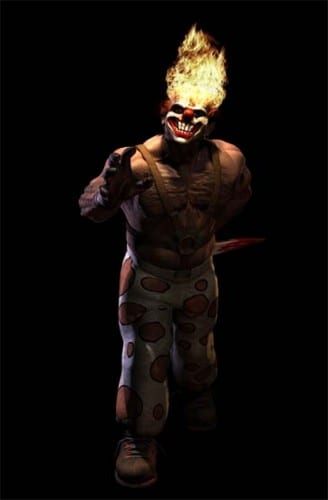 The new Twisted Metal has aerial combat, snipers, and co-op weapons, which help put a spotlight on team play. It also includes factions for the various lead characters and a great new mode called “Nuke,” in which you are required to drag an enemy team’s leader behind your vehicle to a designated point where, if you can hold him there long enough, you’ll be rewarded with said nuke. You then fire it off and have to protect it from being shot down until it takes out your opponent’s floating, neon, giant pinata-like mascot.

This one will not be as dark as TM: Black, as the team is going for a Teen rating with the new version.

Don’t be surprised if this ends up being tops of E3 for a lot of folks. You can check out Sweet Tooth’s entrance and the live gameplay demo from Sony’s press conference here.