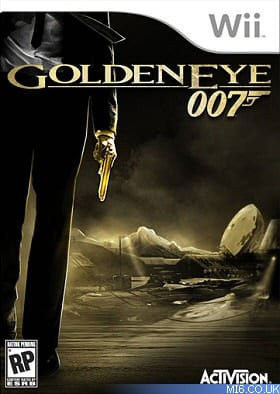 With eight million copies sold and a legion of passionate fans worldwide, the Nintendo 64 version of GoldenEye defined multiplayer gaming for a generation of gamers in 1997. Now, a new take on the legendary James Bond adventure arrives with Activision’s all-new GoldenEye 007,which was unveiled at Nintendo’s press briefing, held today during E3. Better late than never, I guess.

GoldenEye 007 will be available this fall only for the Nintendo Wii, and will be based on the GoldenEye film. The game will feature an unprecedented lineup of four-player split-screen MP options that encourage social gaming, including 40 total characters, 8 classic Bond characters, 5 maps, 3 standard modes and 16 special modifiers that allow gamers to create hundreds of game combinations. GoldenEye 007 also features online multiplayer for up to 8 players designed for seasoned FPS online gamers with unique modes and a robust XP system for unlockables and achievements.  GoldenEye 007 also supports the Classic Controller for gamers who want to play with standard FPS controls and the Wii Zapper for “point and shoot” gamers; players will have several control scheme options, allowing them to experience GoldenEye 007 on Wii any way they want.

“GoldenEye for the N64 was one of the most acclaimed games and fans regularly cite it as one of the most influential and important titles in history,” said David Pokress, Head of Marketing for Licensed Properties, Activision Publishing. “We’re thrilled to bring the new GoldenEye 007 to gamers around the world as an all-new adventure that seamlessly integrates nostalgic GoldenEye movie moments with innovative FPS gameplay and unique multiplayer action that is unrivaled on the platform.”

For more, and to see the official trailer, just log on to www.goldeneyegame.com