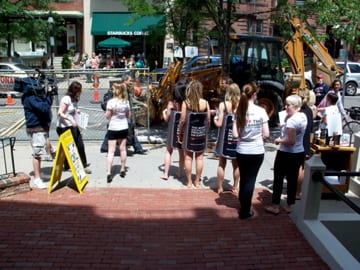 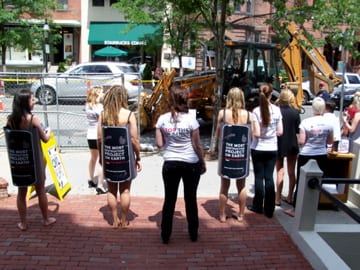 In front of the Newbury St. location of Lush, a handmade soap and natural cosmetics store, a small group of female employees wore nothing but barrels reading “Time For An Oil Change Or We’ll Lose It All” on Wednesday. The small protest was a result of Lush’s campaign against the Unites States Government’s ongoing support of Canadian tar sands oil.

Tar sands are a mixture of clay, sand, water, and bitumen, which is a glutinous and heavy black oil. Since tar sands cannot be pumped from the ground, they are generally strip mined using open-pit techniques. Because of its viscous nature, bitumen requires lighter hydrocarbons and water to be mixed in, which leads to a significant amount of fresh water being boiled and potentially poisoned. The production of tar sands emits three times more greenhouse gases than conventional oil.

The majority of tar sands production in Canada occurs in Alberta, and according to a press release from Lush, could turn an area the size of Florida into a toxic sacrifice zone.

"This is the most destructive project on the planet", said Emily Calvin, a Lush Harvard Square employee who was participating in the protest. "We are working on all of our dependence on tar sands and promoting renewable energy".

Lush is launching the campaign because they believe that the government needs to cease the subsidization of tar sands, and invest the billions of dollars into wind and solar power, as well as fuel efficient cars. For the next two weeks all of Lush’s locations nationwide (103 in all) will be transformed into campaign centers with pictures of deforestation and open pit mining strewn throughout the stores, while leaflets supporting the Rainforest Action Network will be handed out to customers.

The protest was met with general confusion by pedestrians who did not necessarily stop long enough to know what was going on, let alone sign postcards for President Obama encouraging he reallocate funds currently used for tar sands into renewable energy.

The Wild Country Rose bath bomb was created for the two week campaign and all of the proceeds will go towards the Rainforest Action Network’s efforts to end tar sand production. For more information visit www.lushusa.com and www.ran.org