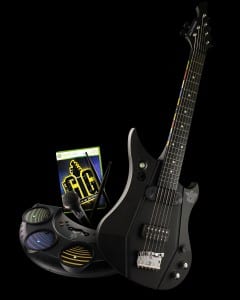 Eric Clapton, Dave Matthews Band and Kid Rock have each entered into exclusive agreements with Seven45 Studios to provide songs for Power Gig: Rise of the SixString, the first band videogame for which the guitar peripheral is a functioning six-string electric guitar. The deals mark the first time ever that songs from each of the three artists will appear as part of a music videogame.  Power Gig: Rise of the SixString will be available for the PlayStation3 and Xbox 360 in October 2010.

"We are extremely excited and proud for Power Gig: Rise of the SixString to be the first videogame to attract the interest of a iconic guitarists and performers like Eric Clapton, Dave Matthews Band and Kid Rock," said Seven45 Studios Chairman and CEO, Bernard Chiu.  "It thrills us to know artists of their caliber agree we are breaking important ground by delivering a game featuring an authentic guitar that absolutely anyone can pick up and play, and which can impart real-life guitar skills that could put anyone on the path to joining these music legends on future lists of the world’s great performers."

Power Gig: Rise of the SixString will be the true evolution of the band videogame experience when it arrives this fall with a genuine six string guitar as controller. The guitar features Seven45’s proprietary technology that can distinguish and recognize gamers’ input all along the guitar, making the guitars as easy to pick up and play as any other band game button controllers.  They also include all the guts of an electric guitar so players can plug their SixString guitars into any standard amplifier. In addition to traditional beat-matching that will be familiar to fans of the band game genre, Power Gig also introduces the option to switch on chording, which presents the added challenge of playing the game using chords that require specific finger placement on the strings.  As players progress through the game, becoming more comfortable with a genuine guitar and potentially choosing to play real power chords, they will find that the byproduct of playing the game is coming away from it with an understanding of some real-life guitar fundamentals.