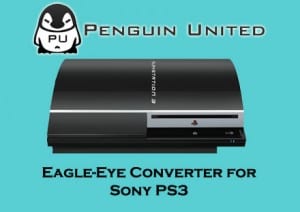 Now, while I’m personally comfortable using a DualShock 3 controller when playing first-person shooters on my PS3, I know that there’s many out there who simply MUST have a keyboard and mouse when playing a game like COD.

Well, if that sounds like you, Penguin United has created the Eagle-Eye, which converts any standard USB HID keyboard and mouse into a turbo charged controller for the PS3.

The Eagle-Eye Converter provides a customized key mapping feature for all PS3 controller buttons that seamlessly transfers the command data to your keyboard and mouse. Now first-person shooter games like Call of Duty; Modern Warfare, Killzone 3, and BioShock can be played with greater dexterity, speed and accuracy than with a standard controller.

"One of the drawbacks with playing first-person shooters is the lack of speed and accuracy offered by traditional controllers," stated Richard Huang, President of Penguin United. "We found a simple solution by bypassing the controller and transferring the button features directly to the computer keyboard and mouse. The Eagle-Eye offers an amazing alternative for fans of shooting games."

One of the most impressive features about the Eagle-Eye is the accuracy and effectiveness converted to the computer mouse, with a 1 to 1 translation from a PS3 controller to the mouse.