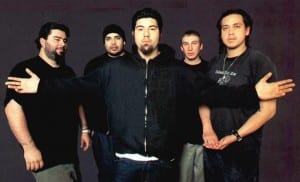 Harmonix and MTV Games have announced that one of the greatest bands ever (in my humble opinion, of course) the Deftones, as well as Boys Like Girls and Crown of Thorns, will make their debuts in the Rock Band Music Store of downloadable content for the Xbox 360® video game and entertainment system from Microsoft, PlayStation®3 computer entertainment system and Wiiâ„¢.

Also, local Massachusetts alternative rockers Boys Like Girls will also make their Rock Band debut next week with "The Great Escape," off the band’s 2006 self-titled, certified Gold album. The band is currently touring the United States as part of The Bamboozle Roadshow, with other bands that include All Time Low, Good Charlotte and Hanson. California rockers Crown of Thorns make their Rock Band premiere next week with "Rock Ready," from the band’s June 2009 album, Faith, which was released on Steven Van Zandt’s label, Lost Cathedral.

These tracks will be available for download on the XBOX 360 and Ps3, this Tuesday, June 8th.