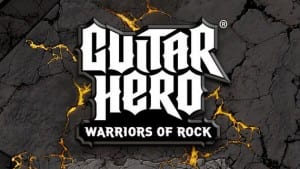 Activision has officially unveiled Guitar Hero: Warriors of Rock today and it’s got one of the unlikely additions to a rhythm game: a story.  This time, Guitar Hero fans will be going on a journey to save rock n’ roll as we know it (and clearly, it MUST be saved.)

“Guitar Hero has set the standard for music based gaming and with Guitar Hero: Warriors of Rock‘s all-new Quest Mode, robust and authentic set list, over-the-top challenges and rock-inspired new hardware, we are once again bringing the soul and energy of rock n’ roll to fans around the world,” said David Haddad, Chief Operating Officer, Guitar Hero.

In Quest Mode, using any combination of instruments, players will embark on a larger-than-life, epic rock journey from the stage of CBGBs, the infamous punk-rock club in New York City, to the molten lava fields of rock treachery as eight Guitar Hero characters transform into rock warriors that must join together to use their unique, game-changing powers to help the Demi-God of Rock take down “The Beast” and save rock n’ roll.

“The world is a boring place. Come with me, and enter a world populated of Demi-Gods and Beasts. Transform from an everyday person and become the savior of rock and roll,” said Gene Simmons of KISS. “It was an honor and privilege to narrate Guitar Hero: Warriors of Rock, even more so, to voice the Demi God. From the God of Thunder to the Demi-God, how cool is that…”

Delivering the largest on-disc rock music set list to-date, Guitar Hero: Warriors of Rock features more than 90 tracks that include guitar shredding hits from bands such as Black Sabbath, Megadeth and Slipknot and larger than life anthems from Queen, Muse and KISS. Additionally, Dave Mustaine of Megadeth wrote and recorded “Sudden Death,” an original track for the game, which was inspired by Quest Mode’s storyline. Along with original songs, the set list also includes special re-records by famous artists and tracks from bands that are making their music video game debut. The first songs off of Guitar Hero: Warriors of Rock‘s set list to be revealed are:

To maximize players’ shredability, Guitar Hero: Warriors of Rock delivers the next evolution in finger-fretting with an all-new, show-stopping guitar controller that was inspired and born from the game’s unique art style and specifically made for shredding.