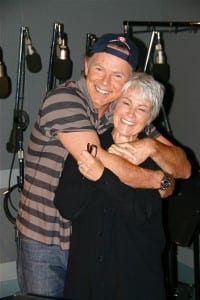 Romano has been instrumental in orchestrating the vocal tones behind the character’s non-live appearances for more than two decades. From Kevin Conroy and Rino Romano to Jeremy Sisto and William Baldwin, Romano knows precisely what voice will best fit the tones of a particular story or series.

Enter “Batman: Under the Red Hood” and all of its deep, emotional undertones. Romano has outdone herself once again, balancing the veteran acting chops of Bruce Greenwood as Batman with the youthful, pained intonations of Jensen Ackles as Red Hood, and tossing in Neil Patrick Harris as Nightwing for humorous resonance.

All in a days work for Romano, who recruits the best in the business — winners of Oscars, Emmys and Tonys alike — to provide the voices behind some of the world’s best known super heroes for the DC Universe Animated Original Movies.

“Batman: Under the Red Hood” is the next entry in the popular ongoing series of DC Universe Animated Original PG-13 Movies from Warner Premiere, DC Entertainment and Warner Bros. Animation. The full-length film will be distributed by Warner Home Video on July 27 as a Special Edition version on Blu-Ray and 2-disc DVD, as well as being available on single disc DVD, On Demand and for Download.

Romano took a few minutes to offer her perspective:

QUESTION: Let’s take the cast one member at a time. What made Bruce Greenwood right for the role of Batman in this particular film?

ANDREA ROMANO: One of the coolest finds of this past year for me was Bruce. I’ve seen so much of his work over the years, and he can do so many things so convincingly. I knew I’d have to offer him a big role. Something with meat. And I knew he would really sink his teeth into the material and make it his own. I don’t need to tell you what a wonderful actor he is — but for this film, he gives a terrific, sensitive performance. This is the most tortured we’ve ever seen of Batman and, without overplaying it, Bruce really showed us a lot of the guilt and issues Batman has in his luggage. It’s an exhaustive, emotional piece, and he carried it perfectly.

QUESTION: How did Jensen Ackles perform in his maiden voyage in animation?

AR: When you get a first-timer in the booth, there are often risks involved, particularly in understanding the techniques involved in working with the microphone. Jensen picked it up so quickly and was so effective in this very difficult role. Red Hood is written as such an embittered, angry, verging-on-insane character, and it can so easily be overplayed. But Jensen found just the right level of energy and flair. I loved his acting. His quality was dead-on, and he really offers a perfect balance with Bruce (Greenwood).

As a director, you live the emotions with the actor. There’s one scene where Jensen has to let his emotions completely bubble to the surface. I had to work really hard to see my script through the tears that I was crying with him as he let his emotions come through.

QUESTION: Who better than Neil Patrick Harris to break up all the emotional drama of this film?

AR: Who doesn’t love Neil Patrick Harris? He’s charming, talented, friendly, and remembers everyone he works with. He can sing and dance, not that I need that talent for Red Hood (she laughs). And in this instance, he did the unthinkable — he came to record for us on his way to the airport as he was going to New York to host the Tony Awards. Nightwing really does give a comic balance to this intense story, and Neil brought that spunky, funny instinct to the character with his usual effortless performance. He’s completely believable whether he’s doing drama or comedy, and he really added to this film. If I could, I would use Neil on every single project I do.

QUESTION: Jason Isaacs is such a nice guy. Why’d you have to make him play a villain again?

AR: Jason Isaacs is a delight. And you’re right (she laughs) — nice guys sometimes make the best villains. I’ve worked with Jason several times, and he’s absolutely fantastic. For Ra’s, I needed something slightly exotic. He’s a great, unusual character, but we had to fight against him getting too cartoony — and I knew Jason had the chops. He’s also a wonderfully intelligent actor — during the recording session, he had so many ideas, and would so respectfully suggest them to Bruce (Timm) and I — and I honestly don’t know that there was one we didn’t use. He helped edit the copy, he added beats where we didn’t even see them, and really nuanced the performance.

QUESTION: The Joker has had some very memorable live-action and animated performances from some notable performers. How did John DiMaggio fit into that legacy?

AR: If I weren’t in love with my husband, it would be John. He’s such a versatile, talented voiceover actor. The Joker is such an intense character, and I knew I needed somebody with great range — and John was delighted to come in and play, and he gave it some beautiful new twists. Because he has such a deep gravely voice, and he’s good at comedy, and he’s a good actor, I knew John already had covered most of the points of the Joker. But I didn’t want a light, thin reedy voice, I wanted a voice with some mass to it. That’s John.

QUESTION: You’ve placed Vincent and Alex Martella as the Young and Younger Robin voices. Had you ever cast brothers in the same film?

AR: This is the first time I’ve ever cast brothers in the same film. I was familiar with Vincent’s work and had been looking for something for him, and this was a great, interesting opportunity because I needed to cast the younger version of this character at two different ages. Vincent has a younger brother named Alex, who has only just begun in the industry, but because siblings tend to have very similar qualities to their voices, it was kind of a no-brainer to cast his younger brother as his younger self. And they were terrific — Vincent was pure dynamite in his performance, and I actually think Alex learned from watching his older brother record before him.

What really surprised me was in their attention to detail. They had to set up this character’s life for another actor that they weren’t even going to act in the same room with, and I thought the transitions were seamless.

QUESTION: What set this cast apart from the first seven DC Universe films?

AR: Each one of these actors had something to bring to the party above and beyond what was required of them. They had questions, they had input, they had ideas and, because the piece is so adult, complex, intense and dark, they knew they weren’t coming in to play The Smurfs. In order to make sure they were in the right head space and had the right tone, they asked a lot of questions. And that’s always a good sign. When the actors are that involved with their characters and the story, that challenges Bruce (Timm) and I to truly think through everything even more thoroughly, and then it becomes a much more collaborative effort. I’m not above telling an actor how to read a line. But I’d prefer that the actor comes up with the idea himself and I’m able to just tweak things here and there. We all need a challenge, something that keeps us on our toes, and recording this film was one of those experiences. A very, very positive experience.

For more information, visit the film’s official website at www.BatmanRedHood.com.