If you like American musicals and like the pageantry, ritual and mythology of Red Sox fandom, you will love this. If you like the Sox stuff but don’t like musicals, you’re going to have a good time too, as long as you brace yourself a little, and keep an open mind.

I say this as a redeemed, post-apocalyptic Sox fan who reached the height of obsessive zealotry during the ’03-’04 season, who also loves theater, but has, let me be clear, a very low threshold for the American musical as a genre. I can’t get into the campy conventions, and generally, I don’t enjoy the style of music on offer. I faced both obstacles head-on in the audience of Johnny Baseball. If it weren’t of and for New England it’d be Broadway all the way. 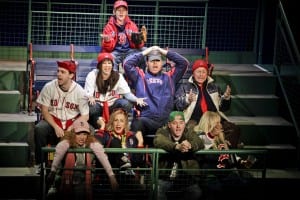 In a nutshell though, this one works because it’s funny, and because, yes: they did their baseball homework. My guess is that the creators, designers and performers put in some serious time studying crowd reaction shots from that infamous, curse-breaking miracle series against the Yanks in ’04. They had the looks, the postures, the outfits, the rhythms and the attitudes of the suffering faithful down to a satirical tee.

Why adapt an already theatrical live event into a stage showâ€”and in this form? Because this is undeniably the defining myth of New England. Because it has staggering parallels to the Greek tragedyâ€”a sin committed nearly a century ago seems to displease the fickle Gods, plaguing a nation for generations, until a band of scrappy heroes comes together from far away lands to take collective action, reverse the curse and defeat the enemies keeping them down–but Greek as it is, it deserves an American form of expression. And finally, because there’s simply more to unpack about the strange experience of investing in the Red Sox for a lifetime, than can ever be explored on WEEI.

Funny and campy as it is, "Johnny Baseball" does not shy away from some of the darker elements of Red Sox history. In fact, it argues that the real sin and curse originate not with the management error of selling the Babe to the hated Yankees, but in the much worse one of being the last team in Major League Baseball to racially integrate.

The play’s central story follows fictional pitcher, Johnny O’Brien (Colin Donnell), a Worcester native and hurler savant, raised by nuns and plucked from obscurity to pitch in The Bigs. An instant baseball success and New England saint, Johnny’s downfall is his love for Daisy Wyatt (Stephanie Umoh), an African-American blues singer introduced to O’Brien by none other than the Babe himself,  who is played as a charismatic, gravelly-voiced degenerate by the very funny, Burke Moses.

When the racist Red Sox management conspires to sunder the couple, citing fears that the Boston fans won’t be able to handle their hero’s taboo romance, O’Brien gets so messed up mentally that he loses his celebrated "stuff."

While the evil plot ruins his career, it also inspires him years later to integrate the team he has wound up couching back in Worcester, and to push for his new African-American star pitcher, Tim (Charl Brown), to be the first to integrate the Sox, an achievement he imagines could redeem him, his ball club and its fans.

"Johnny Baseball’s" greatest strength is its depiction of these fans, from the hoity-toities of the gilded age who believe that God has blessed their team, to the hilarious Worcester Booster cheerleader-leading squad, to the sulky bleacher-bums of ’04.

There’s plenty to quibble with about this show. There’s the often-uninspired songs (I would have been happier with "Tessie," "Sweet Caroline," "Shipping off to Boston," and “Dirty Water") the melodrama, the baseball details it doesn’t get right, and the conspicuous avoidance of a truly important factor of any Red Sox story: the strange mixture of loathing, terror, and often, bitter envy toward the New York Yankees that motivates every aspect of fandom. Plus, some of you, I’m warning you, are not going to appreciate the accents.

It’s imperfect as a work of art to say the least, but in spite of it all, it’s still wicked fun. You can (and should) bring sausages and beer into the theater, and you should be sure to wear your colorsâ€”even if you sport a pink hat, or a blue one with a rigid brim.