On their third album, "American Slang," bluesy punk outfit The Gaslight Anthem are still trying their damnedest to pry off Bruce Springsteen’s King of the Working Class crown. The Boss himself is a fan of the group, having invited them to share the stage with him on more than one occasion.

"American Slang," out June 15, is a perfectly decent album, though it does lose a bit of steam in the second half and falls short of the band’s previous offering, 2008’s "The ’59 Sound." The songs are catchy, nostalgic hybrids of punk rock and Americana, and as musicians, the band members have clearly matured since their last record, employing more sophisticated guitar riffs and song structures here. The title track and first single is the record’s finest, but other standout tracks include the raucous anthem "Stay Lucky" and slow-burning, moving album closer "We Did It When We Were Young." 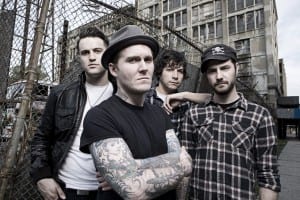 But while Fallon delivers all his lines with what seems to be genuine earnestness, there’s a nagging feeling that his approach to songwriting is less personal in nature and more WWSD? (What Would Springsteen Do?). The characters in songs like "The Queen of Lower Chelsea" feel at best forgettable and at worst clich©.

Fallon also continues his sycophantic habit of dropping blatant allusions to his musical idols ("Mama never told me there’d be days like these"), a trait I suppose could be seen as either grating or endearing. Personally, I tend toward the former and would appreciate a little more subtlety.

They say that imitation is the highest form of flattery, but in The Gaslight Anthem’s case, a little inspired originality might not hurt, either.