It feels almost as surreal to write: "Timon of Athens," is one of the best plays I’ve seen in Boston this year, as it feels to experience A.S.P.’s fun, innovative, modernist vision of the obscure, "problem play."

But it’s true. The strange apocryphal genre-bender, thought by many to be a collaboration between Shakespeare and contemporary, Thomas Middleton, turns out to be well worth saving.

A fable about the evils of being a borrower or a lender, "Timon" is as timely as can be, and is mounted with boundless energy by Director/Scenic Designer/Composer, Bill Barclay, and a dynamite ensemble. Led by new artistic director, Allyn Burrows in the title role, the cast features A.S.P. regulars Bobbie Steinbach, John Kuntz and Steven Barkhimer along with first-rate guests, Daniel Berger-Jones, Joel Colodner, Michelle Dowd, and most notably, Will Lyman in an unforgettable turn as  Apemantus, a misanthropic old philosopher with one foot in the court and the other in the wilderness. 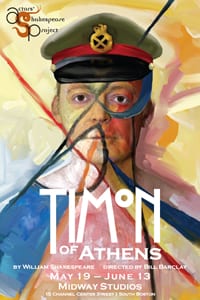 "Timon" returns the company to Midway Studios at Fort Point Channel, an industrial-feeling art space tucked away between South Station and the waterfront. Barclay takes his design concept from the ambiance of the space, setting up camp in front of a flimsy facade decked out with a cubist painting, which looms behind a single sandbox-like patch of earthâ€”a piece which serves variously as rustic decoration, sauna, and naked patch of forest.

Artists, senators and creditors bustle about in paint-splattered white coveralls and they wheel around and scurry up and down giant metal stepladders. We’re in the world of arts and fashion, and have the feeling that everything could be papered over or pulled down and replaced at a moment’s notice.

At the head of the scene is everybody’s favorite meal ticket, Timon, an Athenian lord and proud patron of the arts. Timon delights in throwing feasts replete with lavish party-favors for all of the notables of the day, including dashing young army captain, Alcibiades (Daniel Berger-Jones), and even eminent kill-joy philosopher, Apemantus, who’s sole reason for living seems to be keeping his host in check with criticisms and barbs.

Timon thinks nothing of handing out pricey baubles to his dinner guests because, he tells us, his real treasures are his friends, whom he knows owe him everything. So confident is Timon that his connections and social standing make him invinsible, he ignores the warnings of his faithful steward, Flavius (Bobbie Steinbach), that he is spending far beyond his means.

Nobody loves you when you’re down and out. When Timon learns this, he goes a bit mad, renouncing his throne and fleeing to the woods to try his own hand at the Apemantus role of ascetic misanthrope. If he is done with humanity however, they are not done with him. There’s a war on against Athens led by Timon’s old friend Alcibiades who has been angered and ostracized by a draconian senate, and what’s more, there’s a rumor going around that the fallen Timon is actually sitting on a hoarded fortune. Senator, friend or thief, no man who brings a suit to this changed Timon, will leave unscathed.

Nor can we, a modern American audience who has spent the last several years watching our legendary coffers empty, our debt rack up and our friends eye us wearily with hands still outstretched.

Fortunately, scathed though we may be, we can’t help but laugh along the way of this heightened dream vision, replete with physical comedy and poetry in almost equal parts.