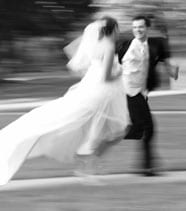 What you need is a morning after. And a morning after that, to meet the face behind the mask. You need to meet that stranger. If you’re not in love with the stranger, you have two options. You can cut your losses and run, or you go on a quest to discover how real that first face was and where and why it might be hiding.

In Prelude to a Kiss, the romantic comedy-fairly tale, currently on stage at the Huntington, this journey is undertaken by an urban office monkey named Peter (Brian Sgambati), who finds himself in strange, supernatural circumstances that heighten and highlight the romantic quandary we all face.

While Sgambati as Peter never quite seems to fall the under a the proper spell, the rest of this playâ€”its supporting cast, the elegant scenic design by Scott Bradley, and lighting design by Japhy Weidman, the words and whimsical story by esteemed B.U. alum, Craig Lucas, and staging by Huntington artistic director, Peter DuBoisâ€”may well still manage to enchant you.

Peter’s got a tough job in this play. Almost instantly and through endearing bluster, he must win the affections of Rita (Cassie Beck), a fearful neurotic with enough beauty and endearing quirk of her own to make her a prize. More than that, he must constantly step in and out of the play’s reality to deliver soliloquies to the audience, reflecting on the play’s action as a thing of the past.

It’s not easy to be distant and knowing with the audience, while remaining active and vulnerable in the plot. As Peter, Sgamboti actually seems a little bit too comfortable in his own skin for the task. Whether speaking to us, wooing Rita in the bar where she works, grappling with the seeming doppelganger that shows up for their honeymoon, pleading with her conservative parents for an audience, or confronting the strange old man (the excellent Macintyre Dixon) who kisses his new bride just before the transformation occurs, Sgamboti speaks with the modulated aplomb of a game show host.

Nevertheless, the mysteries of just what has happened to Rita, what the old man wants, and what will become of them both, set against beautiful scenery which seamlessly swoops in and out of the background is enough to invest in for an evening which could make for an excellent date, with plenty to discuss at the restaurant after the curtain.

And yes, if the title, Prelude to A Kiss, sounds familiar, you may be recalling, as well as the Duke Ellington standard from which it is taken, the 1992 film adaption of the play starring Alec Baldwin and Meg Ryan.

While this Boston debut lacks the star power and the budget of a Hollywood film, neither necessarily supersede the power of live story telling, ever the more powerful for a fairy tale.

Prelude to A Kiss runs through June 13 at the B.U Theatre.