If you want an idea of where the iPhone could be headed, keeping tabs on what competitors have to offer is a great place to start. At Google’s I/O conference this week, Google unveiled, among a dizzying amount of new features coming from all corners of the Googlesphere, the new Android operating system, codenamed "Froyo." The OS, otherwise known as Android 2.2, has a couple of key features that Apple needs to take notice of.

First, no syncing! That’s right, any media that Android users download on their computer is automatically updated to their phone through the cloud eliminating the nuisance of plugging a phone into a computer. Any iPhone user that has been through the agony of attempting to sync their phone when they’re halfway out the door knows how big this is. Staying with the theme of easy access to media, Android 2.2 allows users to stream all of their-DRM free music from their computer’s library to their phone. Pretty cool.

Second, the platform is lightning fast. Google has claimed that the OS is up to five times faster than its predecessor, Android 2.1, and that the Froyo mobile browser will be the fastest in the world. Mobile platforms are all about ease of use, and speed plays a huge part in the user’s experience. This may be a bigger win for Google than even they currently realize as the mobile conversation shifts away from, "We have a smartphone," to "Our smartphone is better."

Third, the Android 2.2. OS will support USB tethering and can act as a WiFi hotspot for any WiFi device. The only question is whether all mobile carriers will support tethering, but the idea of a user’s mobile phone acting as a WiFi hub for all users mobile devices is titillating, to say the least.

And finally, the dagger. Froyo will support Flash 10.1, and it doesn’t look bad at all, despite Steve Jobs’ claims to the contrary. Considering what a big story Apple’s feud with Flash has become over the past couple of years, it’s no surprise that Google had their sites set on integrating their mobile OS with Flash. If Froyo’s integration with Flash turns out to be a big success, as I suspect it will, it could turn into a major black mark on Jobs’ credibility, as it completely undermines everything the Apple CEO has been claiming for years.

As it stands now, Google is done playing catch-up on the mobile platform; they’re not only keeping pace with Apple, they’re starting to outpace them. The question may soon become something unthinkable only a year ago: Can the iPhone keep pace with Android?

The past week’s weather serves as a pretty good indication of how volatile the weather is in Boston this time of year, so you need a go-to weather app before you eschew your boots for Crocs. 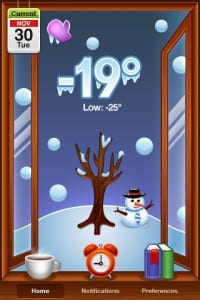 Outside: We want accurate and reliable weather forecasts first and foremost, sure, but a great weather application needs an enticing user interface to keep us coming back. Fortunately, Outside has the most engaging and enjoyable interface of any weather app in the App store. While most weather applications try to jam more information than the user could ever possibly need into an over-crowded screen, Outside has a simple virtual window view that gives the user a quick, appealing view of the current weather. Users can drag the screen down to see more information, but the ease of use and unique take on a weather application sets Outside apart, though at $2.99, it won’t make it’s way onto many iPhones. [rating:3.5]

The Weather Channel: The app has long been the de facto non-native weather application for the iPhone, and it’s duly deserved. The free app has everything a user could want while staying faithful to the TV channel layout we’ve all become so accustomed to. What makes the app great is that the added information The Weather Channel gives you isn’t just filler. Items like pollen forecasts, 10-day forecasts, full screen radars and traffic cams, all contribute to the most useable weather app out there. This is one app that users download and never let go of; it’s the perfect app for its genre. [rating:4.5]

Thermometer: If you travel a lot, this app may be all you need. Instead of results based on pre-set locations that can take costly time to load, Thermometer is geographically based, allowing users to quickly find, in both Celsius and Fahrenheit, what the outside temperature is. It’s simple, but the execution is flawless, and is a must own if you live out of your suitcase. [rating:3.5]