THQ’s upcoming fighting game UFC Undisputed 2010 will require the activation of a one-time use code to play the title online, and will charge anyone playing the title second-hand to purchase the code for $5.

Purchasers of a new copy of the game will find the code waiting for them on the back of the game’s instruction manual, but should you pick up the game pre-owned, you’ll need to buy your way into online play. 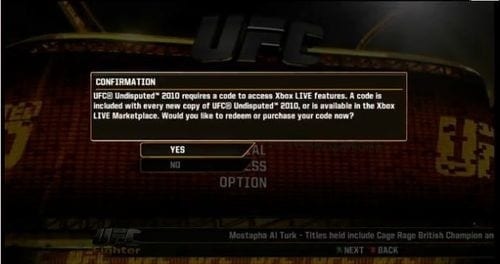 But THQ is beating EA to the punch (pun sorta intended) by launching their attack on used games, at half the price and a week earlier.

When this story broke, late last night, THQ hadn’t yet responded. Now, they have. Speaking with gaming mega blog Kotaku a representative cleared up the issue.

“This multiplayer content for UFC Undisputed 2010 will be available via a one-time code included with the game at purchase. Codes for accessing the content will be available for second-time buyers for an additional $5.”

If this endeavor proves fruitful for both companies,  it could possibly be implemented to more popular franchises both within the sports library of titles (FIFA, etc.) and outside (online shooters, etc.), meaning those “cheap” pre-owned titles you picked up, can’t be played online without forking over more cash.

It’s time to get used to this sort of thing.