Nintendo’s DS has an inordinately large number of titles in its library, though some would argue only a large handful of them are worth playing. 2009’s Scribblenauts was one of them and its sequel, Super Scribblenauts, barring development catastrophe, looks to build off its predecessors more than solid foundation and grow by leaps and bounds. 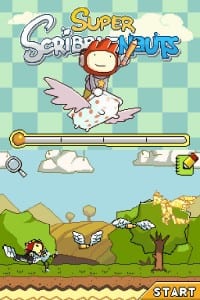 Over the weekend, online retailer Amazon listed Super Scribblenauts (and subsequently and rapidly took it down) and a domain name superscribblenauts.com, pointed us in the direction, but Warner Bros. today made the name and the game official.

Similar to the original, players will guide main character and all around doer of good, Maxwell, on his travels to complete zany quests by writing words, seeing them spring to life and collecting the precious Starites. Only this time there will be adjectives, adding seemingly limitless possibilities to an already extensive and deep word bank.

In Super Scribblenauts, words like the plain and mundane “axe,” can and will become “flaming axe.” “Dog” can easily become “wet dog” and so on and so forth.

What’s more, it seems 5th Cell has answered the shouts of many and rehashed the original’s wonky control mechanic. According to the press release, Super Scirbblenauts will offer “upgraded controls,” which we can only hope to mean the ability to control Maxwell in another way besides guiding with the stylus.

I fell in love with Scribblenauts. I dubbed it a “bedside” game and I continue to play it when I’m on the go. I cannot wait for the sequel, due out “Autumn 2010.”