Activision’s upcoming Spiderman: Shattered Dimensions looks to be doing lots of things right in this new trailer that shows off some great looking art, combat and super-cool web effects:

I played one of the recent Spidey games, Spiderman: Web of Shadows and had a lot of fun with it – at first. Unfortunately, it suffered from some very irritating bugs, other performance issues and a less than inspired second half. It had a lot of potential but was bogged down by serious quality issues. And then let’s not even talk about Spiderman 3 or Friend or Foe. They were both miserable.

I think Rocksteady’s success with Batman: Arkham Asylum has proven to the last of the naysayers that if you make a brilliant super-hero game, the people will be powerless to refuse. Spiderman has just as much going for him as Batman does, so, if a knock-out Spiderman game experience shows up, I have a feeling people will buy it. I guess it’s just easier said than done.

Thankfully, Shattered Dimensions has gone back to the cell-shaded graphics that worked so well for Ultimate Spiderman (Treyarch). It will also offer the visual shake-up of four different Spiderman worlds that have all graced the various comic’s pages over the years. If this new title can match the same level of quality as Ultimate Spiderman, then we may really have something to talk about here. Spiderman: Shattered Dimensions is set for release Sept. 7. 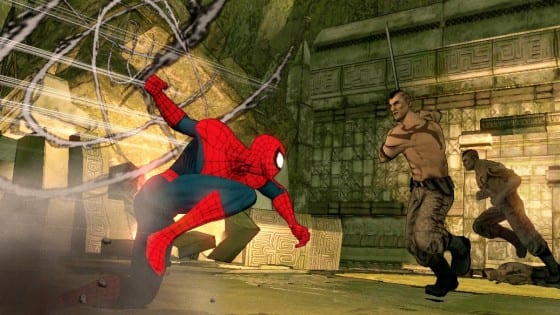